UFOs And Visits From Reptilian Dinosaurs 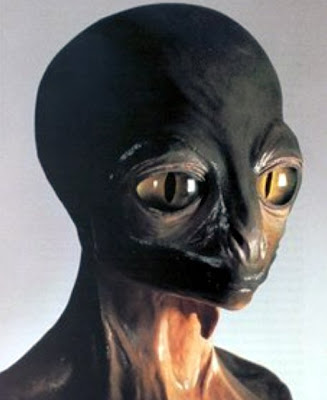 Let's think a little today outside of the norm. Something not to be taken too seriously but, there again, perhaps it should be!

Let's start with dinosaurs. Though we can't be absolutely sure, scientists tell us they existed between 230 and 65 million years ago, see evolution website. In other words they were around for about 165 million years before they became extinct - probably following an asteroid collision, though there are other theories.

So that's the dinosaurs, now lets look at us Humans.

All well and good. Dinosaurs lived for 165 million years and us humans for, say, 5 million years. Isn't there something odd about this?

This is where we start thinking differently. Supposing the dinosaurs did actually develop more than we believe. What if some of them did advance and started to use forms of tools and maybe developed technology, towns and ... well, whatever. Remember they had 165 million years to do this - 33 times longer than humans.

Okay, it does sound like fantasy land but what if they had developed space travel as well? With their technology they would be aware of that disastrous asteroid approaching so some would have left earth. Could, therefore, some of the occupants of UFOs, seen today, have originated on earth?

This might all sound ridiculous but than I came across Dinosauroid, a sculpture by Dale Russell and Ron Seguin of the Canadian Museum of Nature, Ottawa. 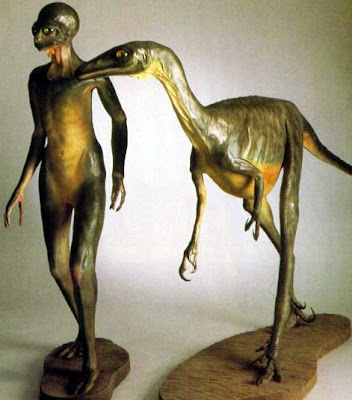 Russell and Sequin developed a computer programme to see how a dinosaur may have looked today, if they hadn't have become extinct, photo above.

What's interesting is how the head of this 'up-to-date' dinosaur - at top of post - looks very similar to how UFO aliens supposedly appear in various sightings, example right.

David Icke talks of a reptilian bloodline - he suggests George Bush and Queen Elizabeth II are of this line. But maybe that's stretching the imagination too much - or is it?

I wrote about an alien skull, supposedly found in Peru, which has a similar facial appearance, as per the photo below. 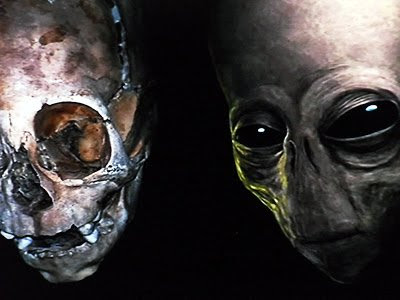 Getting back to where I started the question is, "Why can't we find any proof of an intelligent dinosaur dynasty on Earth, if there was such a thing?"

The answer is simply because it was too long ago. Would you expect to find anything of our culture now in 65 million years?

Of course everything could just be one big coincidence - ah, but there again, there's no such thing.

P.S. Funny old world, just come across this 4 minute video from the BBC.