Secrets And Wisdom From A Tibetan Monastery 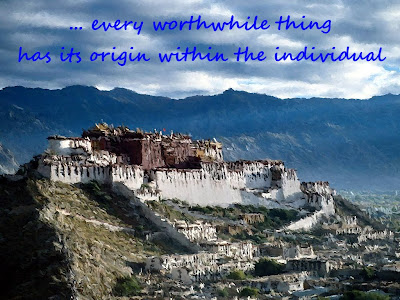 The 1939 manuscript I saw on which my post The Lamas Way To Health, Rejuvenation And Virility was based also included the following which I thought may be of interest. It's regarding information obtained from a visit to a Tibetan monastery.

The Lamas, especially those at this particular Lamasery, are performing great work for the world. It is performed, however, on the astral plane.

This plane, from which they assist mankind in all quarters of the globe, is high enough above the vibrations of the world to be a powerful focal point where much can be accomplished with little loss of effort.

Some day the world will awaken in amazement to what the unseen forces - The Forces of Good - have been doing for the masses. We who take ourselves in hand and make new creatures of ourselves in every imaginable way, each is doing a marvellous work for mankind everywhere.

Already the efforts of these advanced individuals are being welded together into One Irresistible Power. It is only through individuals like the Lamas, and you and me, that the world can possibly be helped.

Most of mankind, and that includes those in most enlightened countries, like America, England and Canada, is still in the darkest of the Dark Ages. However, they are being prepared for better and more glorious things, and as fast as they can be initiated into the higher life, just that fast will the world be made a better place in which to live."

Further Reading:
The Secret Teachings Of Karma And Sickness
The Magic Behind The Secret Lodges
How To Bring The Dead Back To LIfe

Email ThisBlogThis!Share to TwitterShare to FacebookShare to Pinterest
Labels: Secrets, Thought Of The Day, Tibet