The Angel Helpers And White Feathers 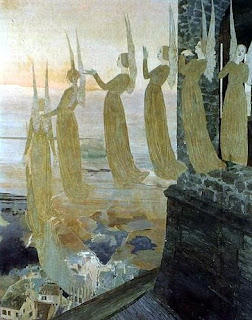 An interesting story today by Ann from Merseyside, England that takes in angels and also white feathers - which I have written about often on this blog.


"I work and see angels.

After my first encounter in 1992 which took me on a path towards distance healing, until I later became a Reiki healer, all these people came and stood around the end of the treatment bed.

There were ladies seated in front and males behind: watching me at one point were 14 people. They all wore different colours and didn't have wings.

I know now they were archangels and ascended masters. At the time, I didn't understand what was going on and rang the spiritualist headquarters in London to ask for help. I was told I was the student and they were checking I did it right. They said I should ask them to go, which they did.

But now different ones come in as I work on someone - and I know what the person needs because of who they are.

I had done distance healing for a few years on one lady who was very ill but then gave her hands-on treatment.  She cried out and when I opened my eyes and asked her if she was all right, she said she'd seen the most beautiful white light (I see this all the time when I'm working) and the love that was coming from it was unbelievable.

I told her who was with her and she was very much comforted. When the time came for her passing, she wasn't frightened any more.

I attended her funeral, and was so happy to see her at the front of the church supported on the arm of her guardian angel.

The family was amazed because as she was lowered into her grave a white feather came floating down and landed on her coffin. All angels exist to help us: all you have to do is ask."

Or To see all White Feather Posts Click Here.


And Finally ...
We are each of us angels with only one wing, and we can only fly by embracing one another.
~ Luciano De Crescenzo

It is not because angels are holier than men or devils that makes them angels, but because they do not expect holiness from one another, but from God alone.
~ William Blake

Millions of spiritual creatures walk the earth
Unseen, both when we wake and when we sleep.
~ John Milton