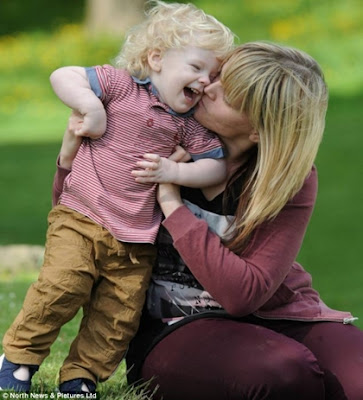 The nurse told Lucy Dove that her 18 month old son, Frankie, was 'the sickest boy in the country'. The poor little lad was being ravaged by a flesh-eating bug.

In April Frankie had to go through a nine-and-a-half hour operation to remove skin and and tissue from his back and thigh, The doctors did not think he would survive the night and told his parents to hope for a miracle.

A second operation followed and Franke was put into a drug-induced coma for 12 days. More infected tissue was removed and then skin grafts to repair the damage caused by the necrotising fasciitis bug. Skin was taken from his legs and trunk and stretched across his back and damaged thigh.

Lucy and her partner Wayne Mould, from Sunderland, must have felt heartbroken, so much so they turned to prayer. Lucy  Explained: "We weren't religious, but we are now. When doctors haven't got any hope what are you left with? We started praying to save him and our prayers were answered."

Lucy also admitted that she had whispered to her little boy, "Frankie, if you want to go, you go."

But Frankie didn't want to go. He showed extraordinary resilience to battle back from the brink and is now home following six weeks of treatment. The consultant surgeon at Newcastle's Royal Victoria Infirmary has said that the boy's skin grafts are 'healing beautifully' but his skin is still swathed in bandages.

Though one must in no way underestimate the expertise of the surgeons and doctors, maybe it was prayer that helped tip the balance in a positive way.

Other Random Prayer Posts:
The Brothel Closed By Prayer
A Vicar's Prayers For Money Were Answered
How A Prayer Was Answered

Email ThisBlogThis!Share to TwitterShare to FacebookShare to Pinterest
Labels: Prayer