The sun was shining, so we headed off in search of King Arthur at Tintagel in Cornwall. Legend has it that King Arthur was conceived and born at the castle.

We live on the south coast of Cornwall so we had to head for the Atlantic north coast and to the village of Tintagel. Once there it was easy to locate the castle, we just followed the signs! 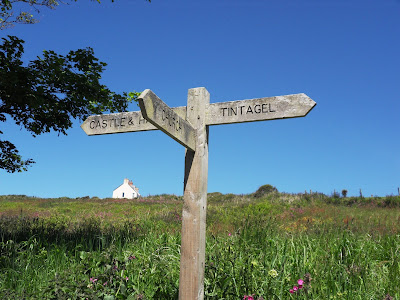 We found the track leading down towards the sea and the cliffs where the castle was built - on what is virtually an island. 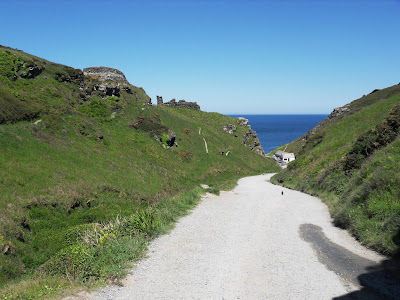 It's quite a trek along the path but it didn't take us too long to reach the cove called The Haven. It's the cliffs to the left that then have to be climbed to reach the castle. Fortunately steps have now been made to the top, though a bit uneven in parts. 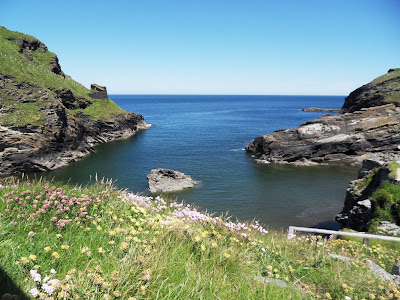 But first a glance at Merlin's Cave, of King Arthur fame, at The Haven before ... 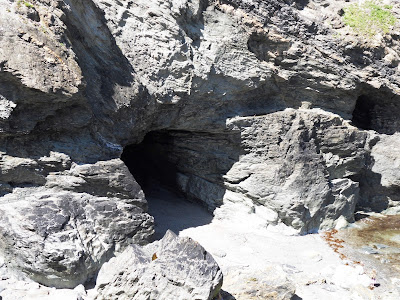 ... heading up the steps that hug the cliffs, twisting and turning. 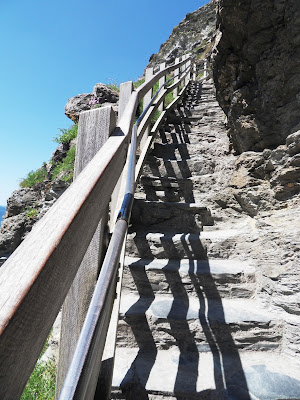 The views and scenery are very special looking down at The Haven. 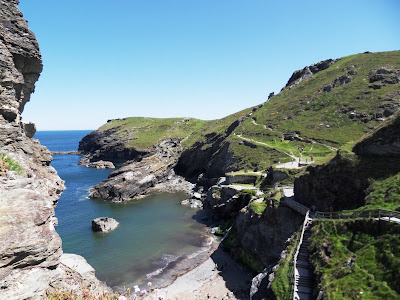 A little out of breath, through the gate and into the castle. The remains which can now be seen are of the castle built in 1233 by Richard Earl of Cornwall. It is said that he built his castle on this spot to link him forever to King Arthur. 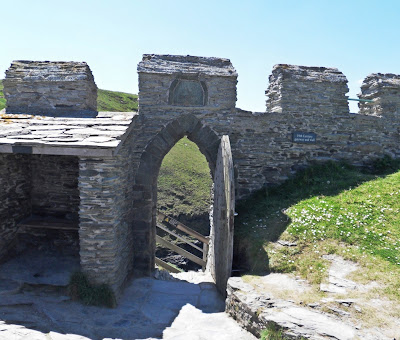 The photo below shows what would have been the island courtyard and Great Hall. 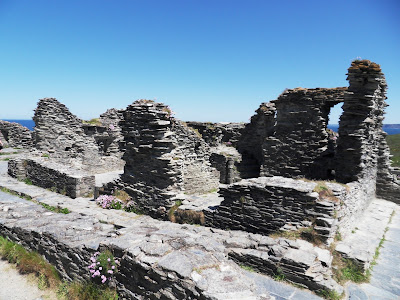 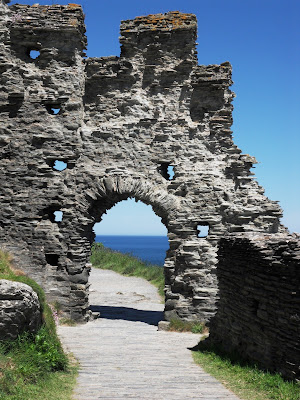 The north Cornwall coastline stretches out for miles and miles in the sunshine. 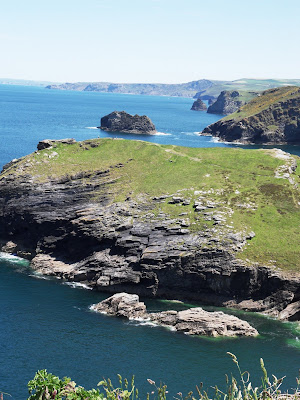 Some dwellings once existed precariously on the grass slopes of the cliffs. The shape of the buildings can still be seen. 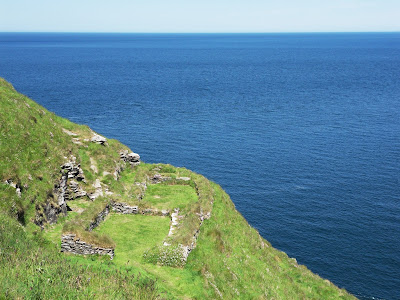 Even the seagulls enjoy the views of the Atlantic Ocean. 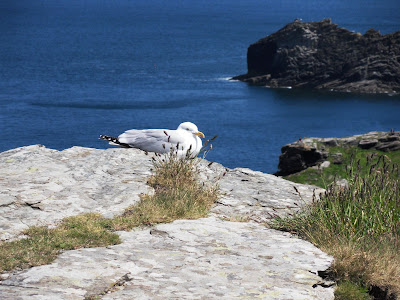 High up we came across what looked to be a cave built into the cliff top. It's not known why this was made, but it appears to have been dug with metal tools and may have once been a medieval cold store for perishable foods. 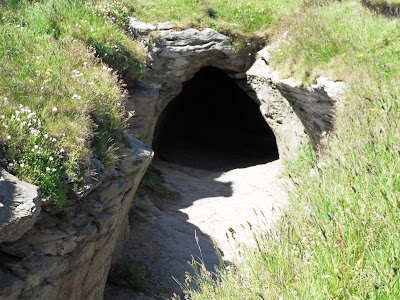 Walking across the Tintagel Castle island we now see the views of the Cornish coastline in the opposite direction. 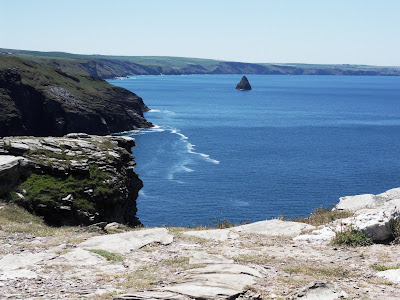 We also spot another part of the castle, as pictured below, but a problem ... 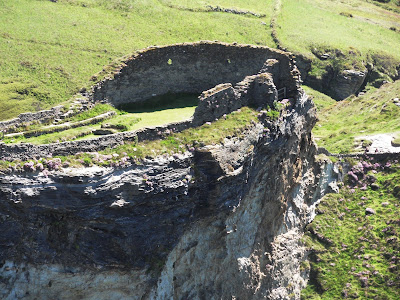 ... it's necessary to go right down to the ground level again and then up lots and lots more steps to reach the top of the cliffs, that don't make up part of the island.

In the photo below you can see the wooden bridge which links the island to the mainland - and the steps going upwards at both sides. 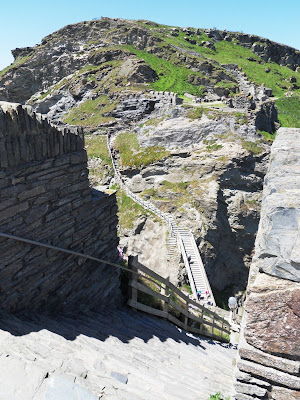 But again the great thing about climbing higher is the views - lots of wild flowers on the cliff sides. 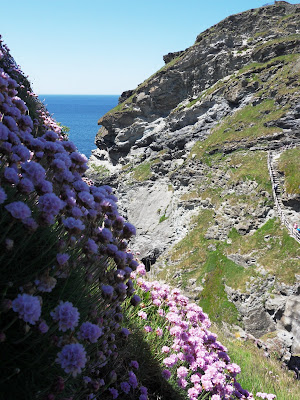 It feels good to be surrounded by history and legends for a short while. Did King Arthur really walk these cliffs, along with his Knights of the Round Table - and what about the magician, Merlin - so many mysteries. 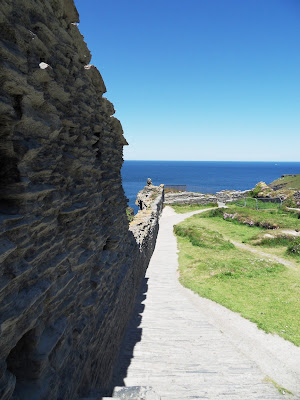 Climbing down the steps again The Haven comes into view. 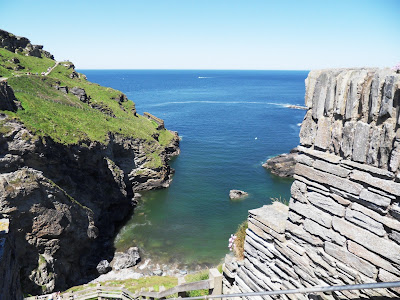 By the side of the track, leading back to Tintagel village, is a small beach kiosk for teas and refreshment - what a perfect way to spend a day. 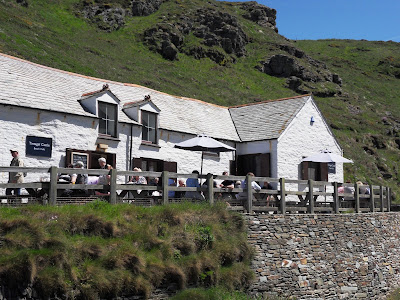 So what are the legends about King Arthur and Tintagel Castle? 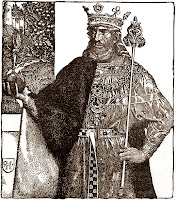 As I mentioned at the beginning of the post, it is said King Arthur was conceived and born at the castle, but it's not that straight forward, of course. This is one version of events:

Uther Pendragon was the king of much of England and he got the hots for - I mean he fell in love with Ygerna (or Ygraine or Igraine), wife of Gorlois (or Gerlas), Duke of Cornwall.

At a Feast Day Uther made it clear to Ygerna that he means to have his way with her - in the nicest possible way. This makes her husband a bit miffed, to say the least, so he takes Ygerna to the fortified castle at Tintagel to keep her safe from the clutches of Uther.

So Uther had a problem but Merlin, the magician or wizard, came to his assistance. With a magic spell or two Uther is disguised as Gorlois (that's Ygerna's husband if you haven't been paying attention).

Uther therefore gets access to Ygerna's bedchamber and to her in the biblical sense - and Arthur is conceived.

It seems that Gorlois died, or was killed, shortly after this earth moving event, so Uther and Ygerna got married, thus legalising Arthur's birth.

Alfred, LordTennyson had a much simpler version: In his Idylls of the King, he describes how waves brought the infant Arthur to the shore and Merlin then carried him to safety. Thus the cave at Tintagel has since been associated with Merlin and Arthur.