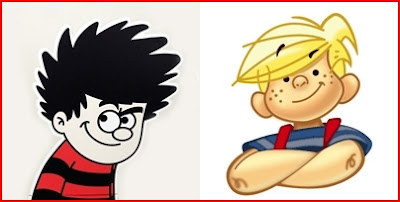 Dennis the Menace, on the left of the image above, has been around for years in the UK I can remember him in the Beano when I was a child.

Meanwhile in the USA, on the same 12th of March 1951, Hank Ketcham's very first Dennis the Menace comic strip appeared in American newspapers. But he was a different Dennis, as can be seen from the image above - he's on the right.

So we have two Dennis the Menace characters being released on the very same day on opposite sides of the Atlantic.

What's going on (or went on)? Plagiarism?

No. it was pure synchronicity or, if you prefer, coincidence.

David Law in the UK and Hank Ketcham in the USA both thought up similar named comic characters and agreed to carry on regardless. The USA Dennis is better known internationally but the UK Dennis is much more popular in his own country.

The only problem was when the USA Dennis was made into a movie and was shown in the UK in 1993. The title had to be changed to just 'Dennis' instead of 'Dennis the Menace' to avoid any UK trademark infringements.

The creators simply both latched on to the same ribbons of thought and came up with the name Dennis the Menace - instead of Charlie, Lionel, Peter or whatever. Such things happen quite often with discoveries, themes for books and so on. It's interesting how people thinking along similar lines get connected.

Today Dennis the Menace is almost respectable in the UK. Even the Duchess of Cornwall (Prince Charles wife) appeared alongside him in a Beano comic strip. 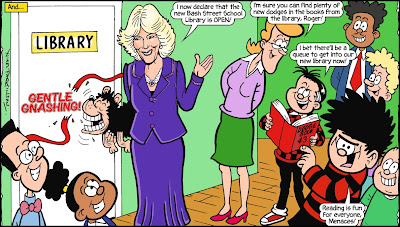