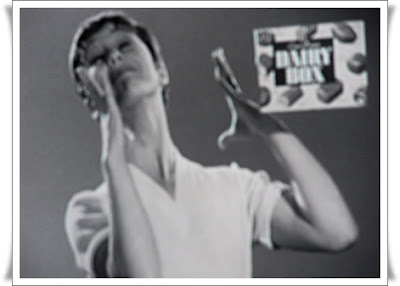 Una Stubbs, 76, is a British actress, having appeared in films and on television over a long period. Last week she was featured on a BBC television show called Who Do You Think You Are? where two amazing coincidences or synchronicity examples were uncovered.

Who Do You Think You Are? is all about tracing the ancestry of well known celebrities and seeing if anything interesting, or maybe even scandalous is discovered.

Before she became well known in the UK as an actress Una did some modelling and promotional work and as such became the face of Rowntrees Dairy Box in the 1950s. She was featured in advertisements and was also seen dancing in early television ads for Rowntrees. I managed to dig out an old photo of Una from that era - as at the top of this post.

Una never met her paternal grandparents, as her mother was ashamed of them. It was uncovered that the reason for this was because the grandparents spent time in a workhouse and were unmarried when her father was born. Quite a sin back then.

The researchers found lots of information about her paternal grandfather. The biggest discovery was that he worked for Rowntrees, the chocolate and sweet manufacturer for over thirty years  - coincidence or synchronicity number one, that's the same company Una promoted in the 50s.

This grandfather was finally made redundant from Rowntrees and his family relocated to Welwyn Garden City.

The show's researchers discovered that Una's maternal great grandfather was Sir Ebenezer Howard - who just happens to be the founder of the concept of the Garden City and was the creator of Welwyn Garden City in the 1920s.

A Garden City was defined as: "A town designed for healthy living and industry of a size that makes possible a full measure of social life but not larger, surrounded by a rural belt; the whole of the land being in public ownership, or held in trust for the community."

I suppose the Garden City Movement could be described as combining the countryside with the town. The idea has since travelled to many other countries.

So two big coincidences for Una Stubbs from the television show Who Do You Think You Are? - neither of which she had any previous knowledge. Shows how easy it is to miss links that may bind us to our ancestors.

After all that detective work it seems appropriate that Una is currently appearing in the Sherlock Holmes television series Sherlock, where she plays the role of Mrs Hudson.