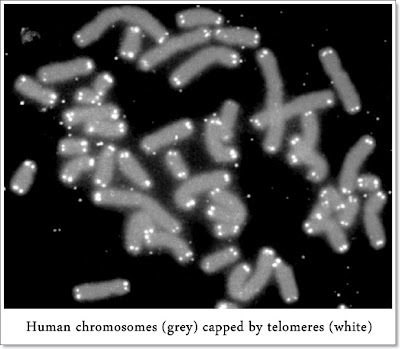 It seems that living longer may at least partly be down to increasing the length of our telomeres.

There has been a study on the effect of healthy living on lengths of DNA called telomeres - tiny caps on the ends of chromosomes that protect against the ageing process.

These are likened to the tips of shoelaces which prevent fraying. Telomeres keep chromosomes stable and prevent deterioration when cells containing them divide.

Telomeres shorten as we age and this is associated with a risk of an early death and being vulnerable to things such as cancer, diabetes and dementia.

Longer telomeres are a sign of being biologically younger.

So, the theory is, if we can lengthen our telomeres we can improve our lifespan - and perhaps considerably.

All well and good but how can we do this?

It seems one of the answers is a healthy lifestyle.

There has been a study published in the Lancet Oncology. Two groups of men, with similar health issues were studied. One group of 25 continued with their same lifestyle while the other 25 had to make considerable lifestyle changes. Their diet was switched to one high in plant proteins, fruits, vegetables and refined grains while low in fat and processed carbohydrates.

They were also taught stress reduction techniques such as yoga and meditation and also took the right levels of exercise: such as walking for 30 minutes, six days a week.

After five years blood tests showed that the telomeres in this group had lengthened by an average of 10%.

Unfortunately in the group, where the men carried on with their same lifestyle, their telomeres were found to have shortened by and average of 3%.

The leader leader of the study, Professor Dean Ornish is quoted as saying, "If validated by large-scale randomised controlled trials, these comprehensive lifestyle changes may significantly reduce the risk of a wide variety of diseases and pre-mature mortality.  Our genes, and our telomeres, are a predisposition, but they are not necessarily our fate."

I suppose that underneath we all know that a healthy, stress free lifestyle will help us combat diseases and may well lengthen our lives - but now we know that with our telomeres size really does matter.

I also read on Wikipedia:


"Advocates of human life extension promote the idea of lengthening the telomeres in certain cells through temporary activation of telomerase (by drugs), or possibly permanently by gene therapy. They reason that this would extend human life because it would extend the Hayflick limit. So far these ideas have not been proven in humans, but it has been demonstrated that telomere extension has successfully reversed some signs of ageing in laboratory mice and the nematode worm species Caenorhabditis elegans."

Other Health Posts:
Is Karma The Cause Of Ill Health
The Formula For A Healthier Sexier Life
How To Find Success With Self Hypnosis

Email ThisBlogThis!Share to TwitterShare to FacebookShare to Pinterest
Labels: Health