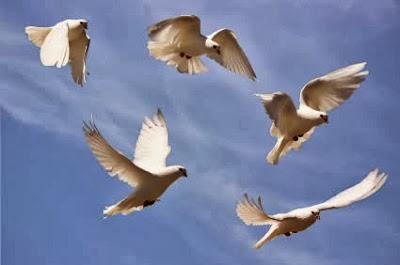 A further white dove story today from Vicki Kinder. Again, as with white feathers, it shows how loved ones who have died can sometimes let us know that they are okay and are thinking of us.


"I would like to share that shortly after my nephew was killed in Afghanistan, by an IED, I was having a terrible time with the acceptance.

I was sitting outside on the porch the looks out over the beautiful desert mountains. There are always lots of birds, but never, ever, have I seen pure white birds like the birds that visited me this day.

There were about 11 or 12 of the most pure white doves that flew almost in pattern with each other and they just circled, played and zipped by me almost close enough to touch. They frolicked for a good long time.

I was even able to take a picture with the camera from my cell phone. They were beautiful, they were majestic, and I was immediately filled with joy, love, and the comfort knowing it was Sean, it was my nephew. I know that I know, that I know....

I was so touched by his ability to find a way to express his presence. I have never seen them again. It was just a moment that was set aside for me and I am so grateful for that moment.

Some people look at me funny, or may not even believe me but when I show them the picture, it makes the unbelievable ...believable!

Do you think that I am right to feel that this was his way of giving me peace?"

In answer to Vicki's final question I would say 'yes' - but it's up to us as individuals to interpret any signs that we may see.