The Dying Can Speak To Those Who Have Died 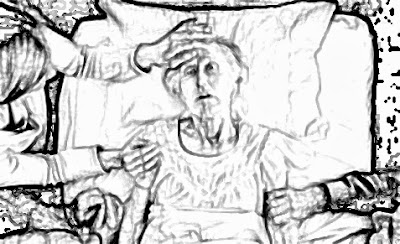 A reader's story I received about seeing those who have already gone before at the time of death.


"This is a story about when my mom died a year ago.

She was at my sister's house for two weeks and started going downhill. She lapsed into a coma on Tuesday. Me and my other sister got to the house on Wednesday.

On Thursday my mom woke up for three hours and started talking to 'other' people who we couldn't see.

My dad died back in 2000, and she kept saying "Frank, would you leave me alone, I am not ready to go with you yet!" Then she would shout at him in German (she was originally from Germany).

Later she 'saw' her mother who passed away in 1964. She started to cry and then spoke German to her for about an hour. She was reliving her childhood and talking about things they did when she was small. She was laughing and appeared to be having a good time with her.

My mom lost twin boys in her fifth month in 1966. She was also talking to them and said, "I am so glad your Oma was there for you. I was so afraid you were alone."

All of us in the room were in wonder the entire time.

This continued for three hours. She would talk to them and then us.

At one time she turned to me and said, "Oh Suzie, I didn't know you were here too, can you see all the people waiting for me?" She was afraid to die, because of the unknown I guess.

The next day, Thursday, she didn't wake up at all.

On Friday morning while I was in the room with her. She woke and said she wasn't afraid any more and that she had seen Heaven. She said she just wanted my dad to stop bugging her because she hadn't 'finished her job yet.' She told me my dog, that had passed away six months before, was with my dad.

She died peacefully the next day."

There are a few small personal coincidences or synchros with this story: my wife was born in Germany and we also lost twins; and there is a Suzie who often leaves comments on this blog.

Other Random Posts Of A Similar Theme:
The Over Powering Love Of Near Death Experiences
Author's Experiences Led Her To Believe In Life After Death
Death Is Freedom And All Is Well