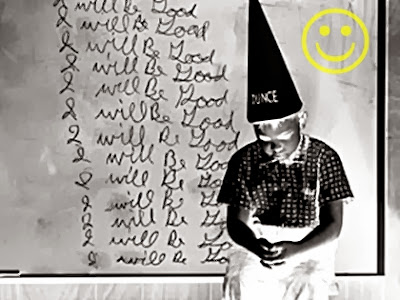 I was reading an article in the Daily Mail titled The TV star who can't tell the time on his £70,000 watch and why being thick is now a great career move. This reminded me that the TV and pop mogul Simon Cowell also praised his own lack of qualifications. He said about his schooling: "I didn't work hard when I was at school. I left at 16 and I didn't have any qualifications. I was useless. The secret is to be useless at school and then get lucky."

So why should anyone bother with a higher education? Oh, and the Jehovah Witnesses agree! They gave the following advice to students in 2012:


"No doubt, school counsellors sincerely believe that it is in your best interests to pursue higher education and to plan for a secular career. Yet, their confidence lies in a social and financial system that has no lasting future." ~ Watchtower 2012 Jun 15 p.23

Yes we are all doomed anyway - though they have given several wrong predictions previously, of course.

The Jehovah Witnesses were giving similar advice to young people in 1969:


"If you are a young person, you also need to face the fact that you will never grow old in this present system of things. Why not? Because all the evidence in fulfillment of Bible prophecy indicates that this corrupt system is due to end in a few years ...

Therefore, as a young person, you will never fulfill any career that this system offers. If you are in high school and thinking about a college education, it means at least four, perhaps even six or eight more years to graduate into a specialized career. But where will this system of things be by that time? It will be well on the way toward its finish, if not actually gone!"
~ Awake! 1969 May 22 p.15

But they did have a reason to say this, other than a forthcoming Armageddon, they wanted to ensure that young people had time to spread the word. In the same 1969 Awake! they wrote:


"... This allows them [young people] to spend much more of their time helping interested persons to learn God's requirements for life ...

True those who do not understand where we are in the stream of time from God's viewpoint will call this impractical. But which is really impractical: preparing yourself for a position in this world that will soon pass away? or working toward surviving the systems end and enjoying eternal life in God's righteous new order?" 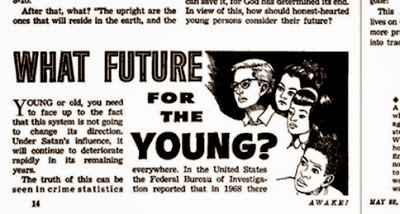 It seems a bit of a coincidence that we have the Daily Mail, Simon Cowell and the Jehovah Witnesses on a similar train of thought about education - though the title of the Daily Mail article is somewhat tongue in cheek.

There has, however, been much discussed in the press about the dumbing down of education in the UK and the USA generally - is this part of some conspiracy theory perhaps? 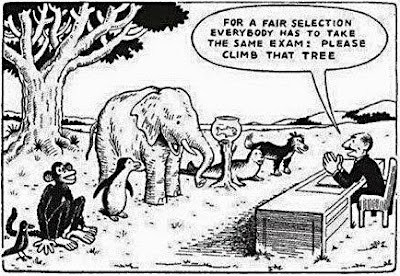 Ruth Lea, policy director at the United Kingdom's Institute of Directors has stated: "This is farcical – we have now got endemic grade inflation which is making it harder and harder for employers to discriminate between able and less well able students, and the universities are having the same problem. We are deeply pessimistic about this dumbing down, A-levels are no longer the gold standard they were 20 years ago."