A Precognition In A Dream And A Ghost With A Fetish 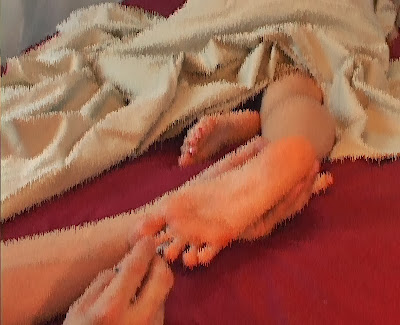 A story today from Aluna which covers a precognition in a dream and a ghost who maybe has a bit of a foot fetish!


We were living in Kenya and one day my dad had to go on away with his work. That night my mum had a horrid nightmare.

She said, "I dreamt I was in a Land Rover and it was night time. There was me, three other people and the driver. Suddenly there was a massive thump and the driver turned around to us and said, 'Oh my god, we've just hit something.'" As the dream went on, she found out they had hit and killed a boy who had been running along the road.

My mum was very upset and the dream was so vivid that she told my dad about it when he got back.

He apparently took a step back and with a horrified face said, "How did you know that?"

When he had been visiting a small village a man's son had ran off while he was working at night time and had run into a big vehicle. He was killed instantly. My dad thought my mum was a witch for a long time after that.

Another time, we were sleeping in a hotel and mum felt her feet being tickled. She thought it was me or my sister so she looked down towards her feet smiling, but it wasn't us.

She said she could see long white arms reaching down from the windows and touching her feet. She kicked at them and woke up relieved it was a dream.

Later that day she found out that there was a rumour that the hotel was haunted and she wasn't the first to have her feet tickled by a ghost while in bed.