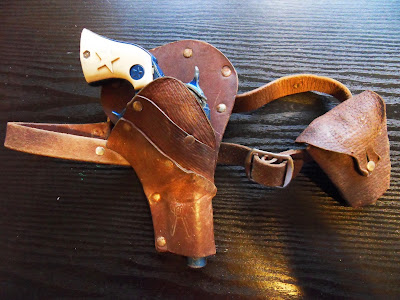 What makes us what we are - nature or nurture? The boffins don't seem to agree but I lean towards nature though accept that nurture can also have an influence. Mind you, that does sound a little like sitting on the debate fence. 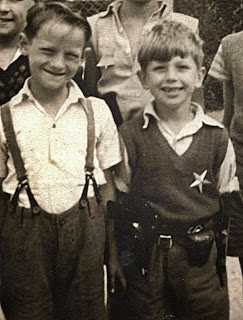 I got wondering about this when thinking about guns. As an adult I detest them and don't understand why anyone would want to own one - unless maybe a farmer or something like that.

So my enjoyment of playing with toy guns as a child didn't carry on into adulthood. I think I realised that shooting and cowboys was simply playing and not for real.

Oh, and case you are wondering, the gun and holster at the top of the page is mine from when I was 6 or 7. And yes, that's me on the right of the other photo: the gap toothed sheriff wearing the very same holster. Though I'm not sure if it's the same toy gun. (The other boy in the photo is Brian Meacock, I wonder where in the world he is now?)

The gun I still have is called 'The Mounty'. I got that as a gift because, as a kid, I also liked The Mounties or the Royal Canadian Mounted Police. At the time I loved their uniform and the thought of riding a horse - there weren't many horses where I was brought up in West London. Now that did influence my early life.

As I couldn't become a Mounty, as I called them, I still wanted to be in the police, but a detective - an influence of books and early television shows.

So I left school at 16 years 9 months and went into Hendon Police College, London. But at 18 my eyesight wasn't considered up to scratch - they had strict physical standards back then, no glasses to be worn. So I had to move on to other things, and I'm very glad, looking back, that I did.

Getting back to nature and guns, when my son was growing up, I never let him have toy guns - not that he ever wanted them - and my daughter-in-law won't let my grandson have them either. It's maybe just as well to keep nasty influences away from children, but I go along with Plato and Descartes who suggest that certain things are inborn, or that they simply occur naturally regardless of environmental influences.

Recent Popular Posts:
Reincarnation: Her Small Son Had Been Killed In A Previous Life During World War 1
Paracelsus And The Guardians Of The Human Race
Teen And Toddler Elvis Presley Photos And His School Report Card Coincidence

Email ThisBlogThis!Share to TwitterShare to FacebookShare to Pinterest
Labels: Nature