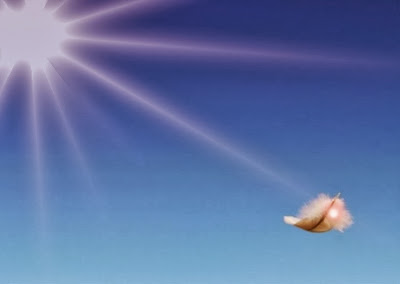 Today a further white feather story from a reader who wishes to remain anonymous. It shows how even skeptics can start to believe once they have experienced something personally. Hopefully the white feathers will have brought some small comfort for the writer, following the death of her son.


"Let me begin by saying that all of my adult life, I have been a hard core cynic, who believed that death was the end for us all.

When my son unexpectedly died from a seizure in September, 2011, I was thrust into deep grief. About six months after his death, I walked to my mailbox, which I rarely did at that time as my husband always brought in the mail when he came in from work each day. As I approached the mailbox, I saw a white feather lying neatly on the ground next to my mailbox. I picked it up and brought it inside, but thought nothing more of it.

That afternoon, as I was reading the posts of a grieving mother’s Facebook group, where there was an entry about feathers as a sign from deceased loved ones. Although I rarely posted on this page, I posted a note simply stating that I had found a feather near my mailbox that day. Later that same evening, my oldest son (also a hard core cynic), who lives 30 miles from me, called in amazement to tell me that he too had found a feather in his yard earlier that same day, but obviously had placed no significance on it, until he read my Facebook post. However, I still believed both feathers to be just some strange coincidence.

A few days later, as I was walking into my office building one morning, I found a feather lying next to the front door. I picked it up, brought it home and put it with the first feather I had found. Although I pondered the third 'coincidence' a bit more, as I had not found a feather in years prior to the first one, I still refused to place any other significance on them.

A few weeks later, I was leaving work late one afternoon, after having sat at my desk crying all day, missing my son so desperately. I walked to my car, unlocked the door and there was a feather in the middle of my driver’s seat.

Now let me add, that my car was in the parking lot, only a few steps from my front office door, right outside my one story office building. My car is clearly visible to me from my office window, where I had been sitting all day. After a few seconds of shock, I took out my cell phone and snapped a photo of the feather. I checked all my car doors and windows, only to find that my doors were locked and all the windows rolled up. Although I have tried to find every reasonable explanation as to how this feather could have appeared in my locked and closed car, I have yet to find one.

As an aside, I have had several other strange occurrences, since my son died, that had nothing to do with feathers, some of which are even more unexplainable. Believe me when I say that I was not expecting any 'signs,' given my hard core cynicism. While I am no longer a 'hard core cynic,' I am still a skeptic looking for answers, as all of my adult life I have searched for logical explanations for any 'other-worldly' events about which I have heard. But, I must say that from the numerous anomalies that I have seen with my own eyes, since my son’s death, I can find no such logical explanation for many of them. Yes, I was in very deep grief when these things occurred and many would say (as I would, had I heard of them from anyone else) that it was simply the imaginings and/or wishful thinking of a bereaved mother. But, again I was never expecting any of them and was shocked and even frightened by some of them.

While I still cannot say definitively how or why these things occurred, I can definitively say that they did."

For more information on white feathers please go to:
10 White Feather Story Posts As Examples Of Messages From The Dead