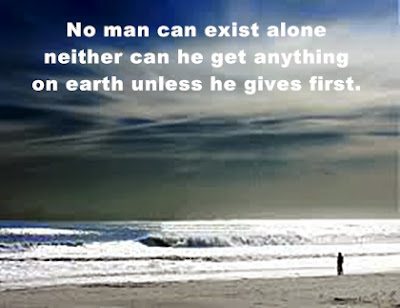 One of the great spiritual laws, I've often seen, is along the lines of: No man can exist alone neither can he get anything on earth unless he gives first.

Nothing new in that but I was reminded from something I read that this also applies to countries, continents or any groups as well as to individuals.

What I had been reading was a treatise that was supposedly channelled through a medium. The teachings are from a Dr Lascelles and the medium was Mr CA Simpson. This is what is written about the consequences of the two world wars:


"As the Great War of 1914-18 drew to a close the horror of the battle fields was replaced by the greater mortality rate of the great influenza plague which spread across Europe, gathered momentum, carrying itself across the Atlantic to USA and eventually spread as far as Australia. It was a particularly deadly virus which killed with the ferocity of shell fire, decimated whole families and, adding to the sorrows and disasters of the War, left Europe and much of the world prostrate.

The suffering, starvation and destruction of sanitary installations apart, there is every reason for concluding that the Influenza Death of 1918-19 was a direct result of four years of concentrated hatred of such a depth and intensity that it actually brought about biological changes resulting in the creation of a new virus. Millions died in hatred. Millions more succumbed to the result of hatred."

The assumption from this is that hatred possesses certain powers. But why then wasn't there a similar virus following World War II? It's about the degree of hatred.

"Strangely enough the Second World War, even greater in its ramifications and extending over a far greater area of the earth was not accompanied by such concentrated hatred.

The First War was fought in a spirit of unmitigated power lust, it was blatantly and unashamedly a military war fought for victory and for the sake of victory. It was accompanied by no great hopes for a better world after victory. Its aims on all sides were directed to the accumulation of more territory and the sheer killing of as many millions as modern industry could handle.

It ended on spite and an atmosphere of punitive vengeance. It was woe to the vanquished and to the Devil with compassion. The bleeding sword of retribution was the final and only arbiter. Out of this appalling state of mind arose the Great Deaths as factually contrived as though it had been planned. Unfortunately, or perhaps fortunately, the victorious powers were smitten as much as the defeated.

The Second World War ended upon a different note. It had always been fought more in sorrow than in savagery despite the appalling slaughter of far more civilians than in the First War. Nonetheless, the victors emerged from the Second War as awed and overwhelmingly conscious of evil as the defeated were. There was little though of revenge.

The lesson of the First War had been learned and the vessel of peace was launched upon a sea of generosity never before witnessed in the history of mankind. Medicines, food and clothing were poured into Europe and the Far East in a grand effort to re-establish health and good will. We had all sinned in not avoiding the Second War and out of this awareness of sinning came the warm hand of reconciliation.

No plague of the 1918 dimension followed. The wisdom of love, be it conditioned by self interest or not had prevailed and the world set out upon a venture of prosperity and humaneness never before envisioned."

You may not necessarily agree with the doctor's interpretation of the two world wars. But it does illustrate that, as well being responsible for what happens to us as individuals, we also reap what has been sown by those supposedly acting on our behalf. Think Bush and Blair for example.

What we give out - whether good, bad or the many gradients between these extremes - we get back.

Other Post:
Ephemeral That Makes Up A Life And Is Easy Forgotten
The Torturer Is Forgiven As The Hating Has To Stop
67 Years After The D-Day Landings They Meet By Coincidence