The Torturer Is Forgiven As The Hating Has To Stop 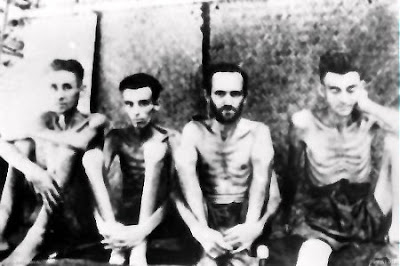 It's strange how things came about, this post for example.

By 'chance' I read here that Colin Firth is set to star in a film called The Railway Man based on a book of the same name by Eric Lomax. Filming is to start this month (February 2012).

The The Railway Man

is a true story that tells of how Eric Lomax's early obsession for steam railways is ironically linked to World War II where he became a prisoner of war on the notorious Burma Railroad. Here he was tortured by the Japanese and witnessed dreadful war crimes.

I then came across a coincidence from Peter Wright.

Peter, another railway enthusiast, explained: "I was recently given a box of books on railways by someone who knew I was interested in railways and discovered a first edition of The Railway Man complete with its cover."

It's always nice to own or find a first edition of a book, but there is more to this. Peter mentioned his good fortune to his brother, who then discovered that his daughter Diane knew Eric Lomax the book's author.

Mr. Lomax often used the library where Diane worked as a librarian in Berwick-on-Tweed. After a few phone calls Diane was able to arrange for Peter's copy of The Railway Man to be signed by Eric Lomax, who is now in his 90s.

All well and good but then I happened on a website called, the forgiveness project, which is a subject that has interested me recently. And who do I come across, but an article by Eric Lomax about how he met Nagase Takashi who was his torturer and interrogator in World War II.

Eric Lomax and Nagase Takashi met in Thailand in 1988. Mr Lomax writes of this experience:

"When we met Nagase greeted me with a formal bow. I took his hand and said in Japanese, 'Good Morning Mr Nagase, how are you?' He was trembling and crying, and he said over and over again: 'I am so sorry, so very sorry.' I had come with no sympathy for this man, and yet Nagase, through his complete humility, turned this around. In the days that followed we spent a lot of time together, talking and laughing. It transpired that we had much in common. We promised to keep in touch and have remained friends ever since." You can read the full article here.

The big lesson for the world today is how Eric Lomax ends his article: "Some time the hating has to stop."

Sometimes things are brought to our attention for a reason.

Further World War II Posts:
67 Years After The D-Day Landings They Meet By Coincidence
World War 2 Coincidences With Happy Endings
They Meet Up Again After 67 Years