Coincidence Examples Of How Love Connects 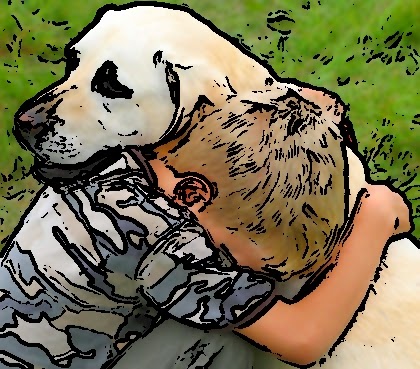 I read on the Epoch Times website that Dr. Bernard Beitman is developing an interdisciplinary study of coincidences.

Not too sure what that exactly means but he gave an example of a personal coincidence he experienced when he was just eight years old.

His big buddy at the time was his dog Snapper and one day Snapper disappeared. Obviously the young Bernard was very upset. His mother suggested that he rode his bike to the local Police Station to see if they, or anyone else, had reported seeing his dog. Unfortunately they hadn't.

By now the young Dr Beitman was very distraught and started to cry. He got on his bike and and because he was so upset took a wrong turn. He carried on along the road and saw a dog ahead that looked just like Snapper and, of course, it was.

Snapper saw him and ran towards him as though he was expecting to meet him there.

Dr Beitman said about this, "I'm almost sure Snapper said to me, 'Where have you been?' The dog seemed to be expecting me."

What seems a wrong turn often turns out to be the right place or, as Dr Beitman states in the case of Snapper, "Love connects."

Dr Beitman gives another example of one of his own coincidences.

His father was on his deathbed, thousands of miles away and Dr. Beitman started choking, apparently without cause. He later found out that at approximately the same time, his father was choking. He experienced what he understands to be simulpathity.

He explains it thus: "Our thoughts and feelings have much more influence on each other than we think," As for 'simulpathity', he describes this as:  "A specific subclass of synchronicity - the simultaneous experience by one person of another person’s distress at a distance."

So that's my new word for today!