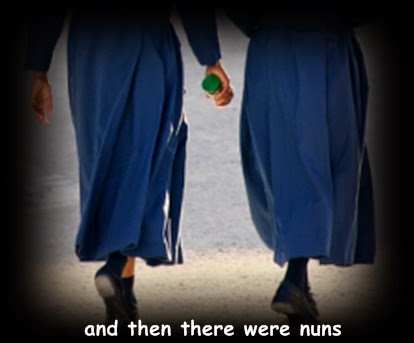 Jane Shilling felt that she may have a calling to become a nun, something she first felt in her teens - but two marriages and three children soon squashed such thoughts. In her late 50s the idea arose again.

A Canadian order of Anglican nuns, the Sisterhood of St John the Divine were running a month long programme for women who were seeking direction in their lives. Jane applied and was accepted.

The regimental timetable and contemplative silence seems to have been hard going for her and her faith wilted. But then something strange happened.

One evening while in the convent kitchen she heard a mysterious inner voice which seemed to emanate from a tea towel. I said it was strange!

The tea towel had a picture on it of Sneaton Castle in Whitby. The voice told her, "You need to go there."

It turned out that Sneaton Castle was home to a community of Anglican nuns known as the Order of the Holy Paraclete. She made enquiries about them and they were happy for Jane to pay a visit.

Before going to Sneaton Castle she arranged to go to a Benedictine order of nuns on the Isle of Wight. She found this place to be troubling, to say the least. A couple of sinister apparitions appeared to her.

The first was a strange man with 'a lascivious smirk ... and an aura of evil' who followed her into an abbey. There was also a small devil like creature 'with grey, leathery skin ... muscled legs, cloven hooves and a thin tail covered with scale-like protruberances.' Jane says of this, 'I saw it clear as day ... I had not been drinking.'

Happily her experience at Sneaton Castle was much better and the nuns allowed Jane to discover how best to follow her compelling inner voice.

Jane has written a memoir of her 'nun' experiences: And Then There Were Nuns.

Resources:
And Then There Were Nuns: Adventures In A Cloistered Life on Amazon UK

And Then There Were Nuns: Adventures in A Cloistered Life on Amazon USA

Recent 67 Not Out Posts:
The Secret Holy Well Of Menacuddle, Cornwall And The Druid's Chair
The Synchronicity Of A Rubber Band Mountain Costing Millions Every Year
The Fatwa, Noah And The Spirituality Of Russell Crowe