Subway Forces A Halal Meats Only Policy On British Customers

I'm a vegetarian. I don't normally try to impose my views on anyone else. My wife, for example, still eats meat occasionally.

What has annoyed me though is the US based company Subway. This food outlet has now adopted Sharia Law for 185 UK Outlets with a 'Halal Meats Only' Policy. 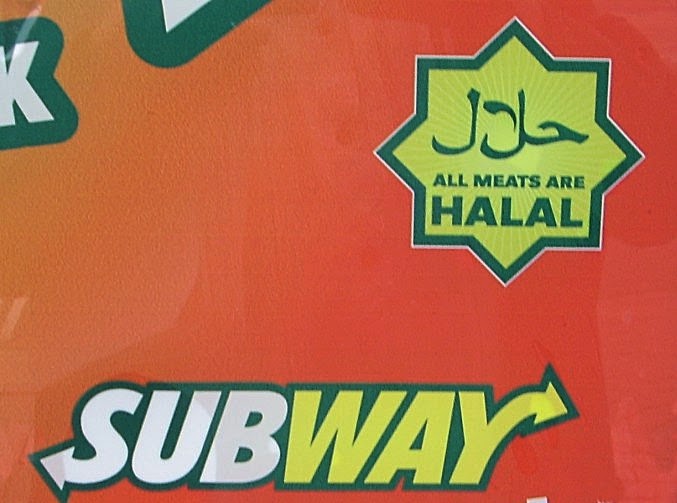 One of the reasons I don't eat meat is because I don't like the thought of animals becoming distressed. But the practice of halal slaughter can only be carried out by Muslim men who chant "Bismillah Allahu-Akbar" (in praise of God) before the slaughter. Okay, that may not be a problem, but the worst bit is that Sharia law demands the animal is conscious at the moment of slaughter.

In my eyes this is wrong for two main reasons.

(2) If anyone goes into one of these Subway outlets for a meat sub or sandwich - it would be halal meat they would have to eat. This should not be imposed on the non-Muslim community in the UK. It's a case of the tail wagging the dog. As Prime Minister Cameron has said recently, we are a Christian country, we may not necessarily agree but certainly our traditions are Christian.

Let's look at what a newspaper found when their undercover reporters went into a halal abattoir:


"... investigators secretly filmed inside a halal abattoir as more than 100 sheep appeared to writhe in agony after being ritually killed ... They [the animals] were placed onto a conveyor belt with their legs tethered before the knife was drawn swiftly across their throats. In the seconds after the sudden cut, the sheep strained to raise their heads as blood poured from their wounds. They then twitched and convulsed as they were hoisted by their hind legs on metal hooks to drain their bodies of blood." Source

The British Veterinary Association (BVA) agree that this way of killing the animals causes suffering. Their President-elect, John Blackwell said, "I don't think an outright ban is a long way off, there is enough of a view that this practice is inhumane and causes suffering at the time of death." Source

The RSPCA has a similar view. Their website states: "We recognise that religious beliefs and practices should be respected. However, we also believe animals should be slaughtered under the most humane conditions possible. Evidence clearly indicates that slaughter without pre-stunning can cause unnecessary suffering." Source

Some more enlightened countries like Norway, Iceland, Switzerland, Sweden and Poland have all banned slaughter without stunning. Denmark has also now joined them. Their agriculture minister, Dan Jørgensen, said: "Animal rights come before religion." Though I wouldn't expect everyone to agree with his statement!

Okay, that's about it.

Personally I wouldn't now go into any Subway outlet and I'd like to see others boycott them as well.

But to be fair. This is what a Subway spokesman said: "The diverse multicultural population across the UK and Ireland means we have to balance the values of many religious communities with the overall aim of improving the health and welfare standards of animals," Source

Other Recent Posts:
The Message In A Bottle Coincidence
Could This Be Proof Of Reincarnation?
The Green Skinned Children Who Appeared In An English Village