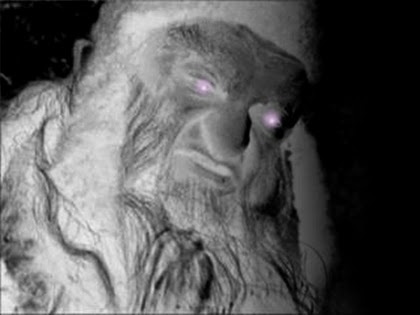 Here's a creepy story of noisy spirits from Rosa Holden of Canada.


"About sixty years ago there was a house in Pembroke that was really haunted - a house where mysterious tappings, weird noises and strange happenings went on for weeks and finally drove the inhabitants out. At one time the house was occupied by a Mrs Larose, but she was driven nearly frantic by eerie and unexplainable noises in the house at night and didn't stay there for long.

Some time later she left. My daughter, Mrs Rome, rented the place and while she was there I went to visit her.

When I arrived she told me she heard a scraping sound on the front door, like somebody scratching it with a stick. On looking out of the window she saw what looked like a dwarf all dressed in white. As she looked the apparition, or whatever it was, disappeared into the cellar through an outside trap door. Several neighbours were called to the scene and they searched the cellar but could discover nothing unusual.

The day I arrived we were eating our dinner when all of a sudden there was a terrific noise just below us, as though somebody had bounced a heavy stone down the cellar stairs. Then followed a long, shrill whistle and at the same time there came a tapping on the back door, I started to go to the door to open it, when I was nearly scared out of my wits by a series of thumps on the floor beneath me. I stayed in the house while my daughter ran to fetch two or three neighbours. In a moment of bravado we descended to the cellar, but there wasn't a soul in sight.

On one occasion when Mrs. Larose occupied the house, she was sitting in the kitchen eating toast and drinking tea, her cup of tea was on the damper of the stove. All of a sudden something struck the damper from beneath and sent the cup flying into the air. I was told this happened two of three times.

I also know Mrs Larose died a very short time after she moved out of that house, and I really believe it was fright that killed her."