The Synchronicity And Coincidence Of Butterflies And Dragonflies 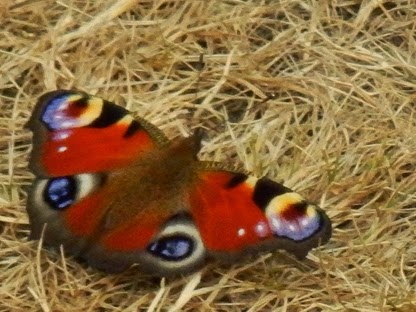 It's interesting how life weaves it's web with the aid of synchronicity. This is what I mean. I had decided to publish the following coincidence example, but then thought that it wasn't really sufficient for a full post.


"While watching television, I heard an unfamiliar noise, which turned out to be my car alarm.

I found no obvious reason, but I suddenly saw a butterfly fluttering around inside the car. What film had I set up to record that evening? The Butterfly Effect!"

I therefore decided to search on Google the words 'butterfly coincidence'. This led me to a September 2013 post by Mary DeTurris Poust with the title of Convergence, coincidence, and cosmic connections.

In the post she writes: "... I was talking with a priest I know about some issues I needed to grapple with on retreat, he made a comment about being like a butterfly, and I responded: "I’m so not a butterfly; I’m more of a dragonfly." And that was that, a comment made in jest without much thought."

Shortly afterwards Mary was looking for a religious icon, "... but instead I found a notecard from a dear - and very holy - woman who died more than a year ago. It had a beautiful watercolour dragonfly painted on the front of it."

She reached the retreat centre, "... and within 30 seconds a giant dragonfly landed in the grass right in front of me. A few minutes later, another one zoomed by. As I went to my car later that evening to get something, a dragonfly buzzed right in front of me in the parking lot. And I smiled every time."

Finally she tells how she was sitting at her favourite prayer spot having a deep, heart-to-heart silent conversation with God. She writes, "I reached a point of peace, an interior place where I posed a question, accepted that I had to let it go, and then asked God to please take care of it. And within five seconds a dragonfly landed on the dock right next to my chair. It was the only one I saw that day, but it showed up at the exact right time."

I decided then to visit Mary's home page, it's an interesting blog by the way. This was on the 26th of August, and her post for that day, What are you chasing?", just happens to have an image of a butterfly for illustration purposes.

I thought that would be an adequate ending for this post, but there's one more synchro. As I finished writing a butterfly came and sat on the windowsill of my office.

This got me thinking about some of the posts on this blog where butterflies have paid their part. Some people believe they may be messengers from deceased loved ones, or perhaps some sort of sign.

There's meaning in those butterflies. And, I guess, in dragonflies too!

Other Random Recent Posts:
The Telegram That Told Of A Death
The Cornish Bakers Weird Coincidence
Sammy Rescues Lucy From The Dinosaurs At Eden