Is The End Of The World Nigh - The Answer! 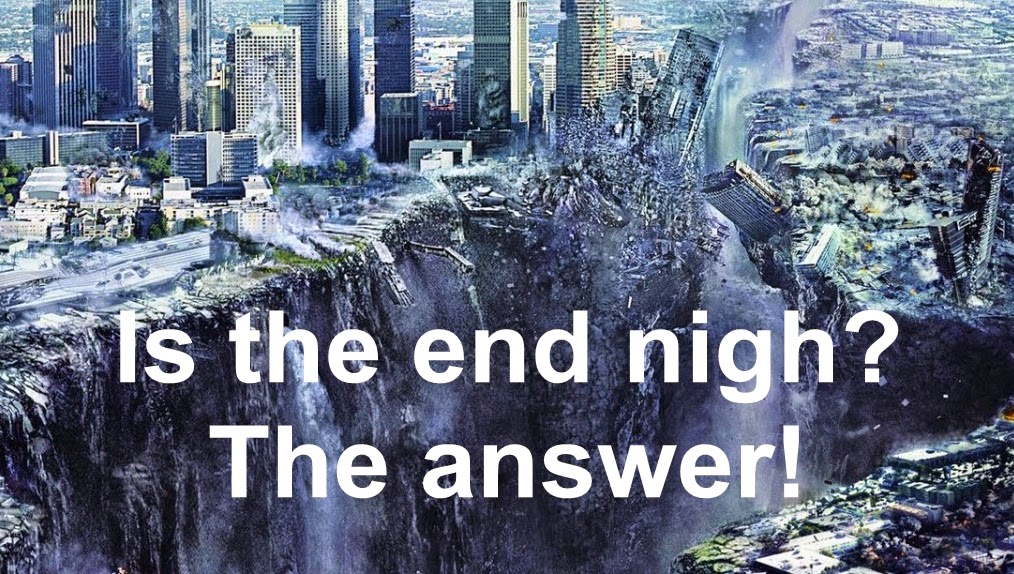 A few days ago (Nov 5) we were ready to go for a walk but the door bell rang. I answered and on the doorstep were two Jehovah Witnesses. I don't normally bother with them but I heard Karin answer the phone to one of her friends - so knew she would be a while!

So we chatted away about the end of the world as we know it - Armageddon - and I asked them lots of questions about 1914, 1975, how the Bible has been altered and so on. I asked if they followed the Bible and if they did, did they keep to the Divers Laws as in Leviticus 20-23. This threw them a bit.

The two men were lovely, genuine people but I think they were glad to get away from me, as opposed to the reaction they normally get on the doorstep. We shook hands and agreed to disagree.

With thoughts of the end of the world in my head Karin and I went for our walk. On the way back I popped in to buy a newspaper. I still occasionally like reading news the old fashioned way accompanied by a mug of tea and a biscuit.

I read the front page doom and gloom and then opened up the paper by 'chance' at page 40 - the astrology predictions. I glanced at my sign and it read: 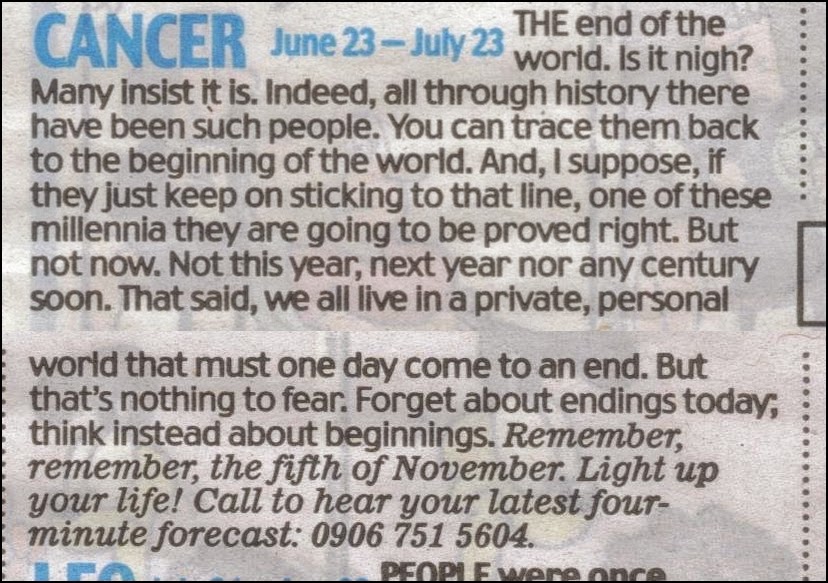 "The end of the world, is it nigh? Many insist it is, indeed, all through history there have been such people. You can trace them back to the beginning of the world. And I suppose, if they just keep sticking to that line, one of these millennia they are going to be proved right. But not now. Not this year; next year nor any century soon. That said, we all live in a private, personal world that must one day come to an end. But that's nothing to fear. Forget about endings today; think instead of beginnings."

I'm not saying for one minute that I believe these sort of newspaper or magazine daily predictions. But it was synchronicity. I'd been talking about the end of the world and received an answer which confirmed what I thought on the matter. It was by 'chance' that I had bothered to buy a newspaper.

I don't doubt the sincerity of many Jehovah Witnesses, it takes guts to knock on doors, but I see it as a man made religion.

Judge Joseph R. Rutherford, one of their past leaders, said that 'Millions now living will never die.' What he meant by this, at the time, was that people born in 1914 would be alive at the time of Armageddon when the world on Earth, as we know it, would end. Instead it would be turned into a paradise for - well, I guess, Jehovah's Witnesses.

In 1925 Rutherford announced that Abraham, Isaac, Jacob and the prophets were to return so he prepared a mansion ... and so on. I'll just add that Charles Taze Russell, the founder, had previously forecast 1914 as the date when the world would end.

Anyway, looks like we are all safe for a while yet: my newspaper astrologer couldn't possibly be wrong, could he!!