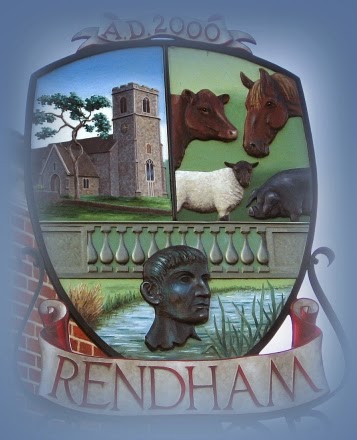 I think that today's coincidence or synchronicity story is quite remarkable and on several layers. See what you think.

Douglas Hunter lived in Australia but his family had been in New Zealand for at least five generations. He met and fell in love with Ros, a girl from England. They became partners and consequently had two children.

When Ros was pregnant, with their third child, the couple decided they would move to England. They agreed to settle somewhere in Suffolk, near to where Ros's parents lived.

Ros went on ahead to look for somewhere they could call home. One of the places she saw was an old disused chapel. It was for sale and was ripe for converion into a family home. The chapel was in Rendham near to Aldeburgh in their chosen county of Suffolk.

Ros said, "I was pregnant and jet lagged but I thought it was wonderful. I loved the pillars inside and managed to ignore the problems."

The deal was done to buy the property and Douglas duly arrived from Australia to see what she had bought. He viewed the enormous dilapidated building with holes in the roof, broken windows and rows of pews. He looked at Ros and said one word, "Why?"

Then came what Douglas describes as a spooky surprise.

His mother came over from New Zealand for a visit and was looking through some of the very old documents that had been left in the chapel and made an amazing discovery. She found that the chapel was built with money from one of their ancestors!

As Douglas emphasised, "I didn't know any family connection with Suffolk."

His ancestor a Dr Isaac Watts was a wealthy man who was a prolific hymn writer including 'Joy To The World' and ' Our God Our Help In Ages Past'.

The chapel was built back in 1750s from a donation made by Dr Watts and has quite a history. John Wesley, the founder of Methodism, made visits in the 18th century. The building was finally deconsecrated in 1979 as the congregation gradually diminished in size.

Douglas and Ros coverted the chapel into a wonderful five bedroom family home in which to bring up their children.

How strange that Douglas should meet Ros, a girl from Suffolk - where there just happened to be a link to his ancestors. Some links appear never to be broken.

Other Recent Posts:
The True Story Of The Fanny Scratching Ghost Of Cock Lane
Look Out! Look Out! Karma Is Coming to To Get You!
67 Not Out Readers Coincidence Stories