The True Story Of The Fanny Scratching Ghost Of Cock Lane

The story of the Cock Lane Ghost began back in 1760, in a house near to London's famous Smithfield market and just along from St Paul's Cathedral. Cock Lane still exists today. 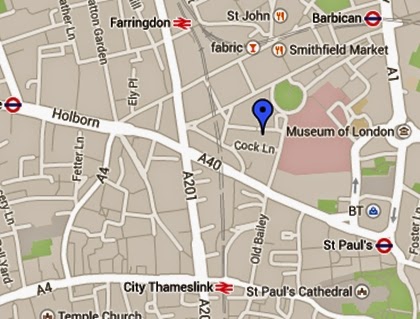 William Kent, a stockbroker, rented a house from the parish clerk, Richard Parsons. The arrangement was fine until 1762 when Kent's wife died and he began to court her sister, Fanny, who soon became his 'housekeeper'.

Miss Fanny and Mr Kent sealed their love by making wills and naming each other as beneficiaries. Shortly following this Kent and Parsons fell out following a disagreement over money, so Kent moved out of the property and began legal proceedings against Parsons. As this turmoil was happening Fanny fell sick and died of smallpox.

With Fanny dead Parsons hatched a cunning plan. He concocted a story saying that Kent had murdered Fanny to get his hands on the inheritance.

Parsons made claims that Fanny was now haunting the house in Cock Lane. He alleged that Fanny had come back as a ghost. What's more he said that she had contacted his 12 year old daughter, Elizabeth. Fanny told her that Kent had poisoned her.

The story spread like wildfire and seance's were held in the house. At one time Parsons invited a committee of 20 men to witness Fanny's ghost possessing his young daughter. Elizabeth, under the influence of Fanny, declared once again that she had been poisoned and that the only way she could rest would be if Kent were hanged.

This got the house more publicity and curious people wanted to hear Fanny Scratching. So much so, that Parsons began charging people to come inside to hear the ghostly sounds of knocking and scratching.

Of course there are always doubters about anything psychic, even back in the 1760s, so an investigation was started. One member of the investigative team being none other than Dr Samuel Johnson. He wrote the following about his experience of a seance held in the Cock Lane house (it's quite long and in the language of the time.)


"On the night of the 1st of February many gentlemen, eminent for their rank and character were, by the invitation of the Reverend Mr. Aldrich, of Clerkenwell, assembled at his house, for the examination of the noises supposed to be made by a departed spirit, for the detection of some enormous crime.

About ten at night the gentlemen met in the chamber in which the girl, supposed to be disturbed by a spirit, had, with proper caution, been put to bed by several ladies. They sat rather more than an hour, and hearing nothing, went down stairs, when they interrogated the father of the girl, who denied, in the strongest terms, any knowledge or belief of fraud.

The supposed spirit had before publicly promised, by an affirmative knock, that it would attend one of the gentlemen into the vault under the Church of St. John, Clerkenwell, where the body is deposited, and give a token of her presence there, by a knock upon her coffin; it was therefore determined to make this trial of the existence or veracity of the supposed spirit.

While they were enquiring and deliberating, they were summoned into the girl's chamber by some ladies who were near her bed, and who had heard knocks and scratches. When the gentlemen entered, the girl declared that she felt the spirit like a mouse upon her back, and was required to hold her hands out of bed. From that time, though the spirit was very solemnly required to manifest its existence by appearance, by impression on the hand or body of any present, by scratches, knocks, or any other agency, no evidence of any preter-natural power was exhibited.

The spirit was then very seriously advertised that the person to whom the promise was made of striking the coffin, was then about to visit the vault, and that the performance of the promise was then claimed. The company at one o'clock went into the church, and the gentleman to whom the promise was made, went with another into the vault. The spirit was solemnly required to perform its promise, but nothing more than silence ensued: the person supposed to be accused by the spirit, then went down with several others, but no effect was perceived.

Upon their return they examined the girl, but could draw no confession from her. Between two and three she desired and was permitted to go home with her father. It is, therefore, the opinion of the whole assembly, that the child has some art of making or counterfeiting a particular noise, and that there is no agency of any higher cause."

The findings of the investigation meant that Parsons was put on trial for fraud - remember he had been charging people to visit the house and attend seances there. He was found guilty and sentenced to two years in prison.

Other Ghost Story Posts:
A Sighting Of The Bank Of England Black Nun Ghost
The Faceless Female Ghosts Who Have Travelled The World
Kate Says She Has Sex Regularly With A Ghost