Sleep Paralysis And Seeing People Who Aren't There - Or Are They? 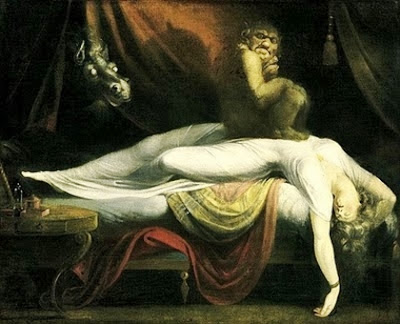 I had a follow up comment from Jo Bober to my post Kate's Sex With A Ghost Turns To Sleep Paralysis And Thoughts Of Aliens. The post is primarily about sleep paralysis. Jo writes:


"I have had sleep paralysis episodes for as far back as I can remember. They tend to come in groups rather than random attacks. I've tried to control them, and have on a couple if occasions, but usually they're just plain scary.

Twice I've seen a tall figure stood in my room. A man wearing a hat and a long coat. He never did anything but his presence scared the hell out of me.

At other times I've felt someone lying next to me and could hear their breathing. Sometimes I can feel them touching my skin.

Only once did I feel anything physically aggressive and the following morning I had bruises on my wrist. I took photos and was determined to get to the bottom of what was happening, but then I started to think I was probably driving myself crazy and must have done them myself in my sleep. Its the only logical answer.

I'm just glad other people have shared their experiences on the internet."

It does seem that hallucinations, or believing someone is with you, often occurs with sleep paralysis. The medical explanation is along the lines of:

This is thought to be due to the brain not properly switching out of dream mode.

Too fanciful? But strange things do happen, like with the Double Split Experiment for example.

Going back to sleep paralysis I have experienced this myself, fortunately only twice and neither time did I see of hear anything peculiar. But it was still quite scary.

It's funny old world, with much more to it than we first imagine.