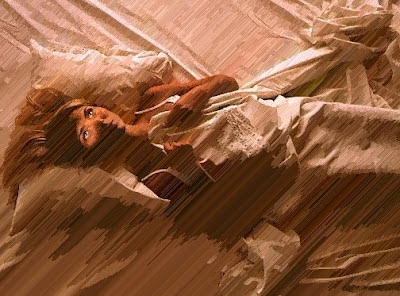 Towards the end of last year I published three posts from Kate who claimed that she regularly had sex with a ghost. It was quite controversial because some readers didn't believe her while others thought it possible. Kate has now sent me an update but things have changed somewhat. Here's what she has to say.


"As you will remember in my last email I told you how I was having sex every Wednesday with what I called a ghost. I called him Thomas and looked forward to his visits and they became the highlight of my week.

"I am definitely sure they weren't dreams as the feelings and sensations were very real, but I did go to sleep straight away afterwards and would wake up as normal the next morning.

"But then mid February of this year things changed and I got quite scared, something I wasn't previously.

"After the sex had taken place I woke up and couldn't move. I tried to shout out but nothing happened. I don't know how long it was that I stayed like this. I could think quite clearly but couldn't move my limbs or any part of my body.

"Gradually after I don't know how long I became able to move again and felt very scared by what had happened. So much so I decided I would try to end my relationship with Thomas.

"The next week, however, he returned and I felt him on top of me but that's all I remember until I felt I was trying to wake up and again couldn't move.

"The week after I went to stay with my aunt who I have mentioned in my previous emails. Wednesday was no problem and I slept all night normally without any interruptions and I got back to a before Thomas life. I even got myself a new boyfriend.

"Since that time I've only had one other occasion when I felt paralysed on waking. Otherwise life has been normal. I've heard of people being paralysed after alien visits and I know this sounds mad, but I'm wondering now if Thomas, as I called him, wasn't a ghost but an alien. It's crazy, I've never seen a UFO or anything like that but I have this inner feeling that perhaps what happened was out of this world, which in some ways it was!"

Back in 2010 I published a post about sleep paralysis The Night Demon Sitting On Your Chest. What made me write this was because I had experienced this myself. I wrote:


"I 'woke' up and felt completely paralysed. Frightened, I called out over and over to my wife to help me but she didn't hear. I felt, or had an instinct, that I had to try and relax. I was still paralysed for a while but gradually I returned to this world. I know this wasn't a dream." 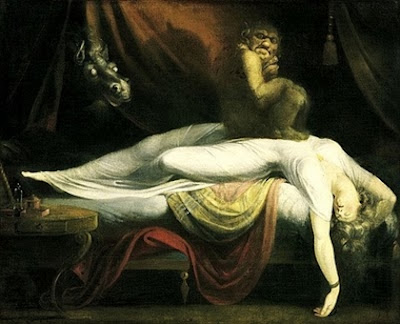 As happens in life, by chance I read an article in the Daily Mail by a Dr Scurr on this subject. His explanation of sleep paralysis is:


"Sleep paralysis is a form of parasomnia - an undesirable physical event that happens as you fall asleep or during periods of lighter sleep. In the case of sleep paralysis, this is thought to occur during the dreaming stage, known as rapid-eye movement (REM) sleep.

"... During this dreaming period our brain paralyses the body. This is a safety mechanism to prevent us acting out our dreams and hurting ourselves.

"This safety switch turns off once we wake, but for some reason there can be a delay and people can find themselves paralysed once they wake.

"This usually only happens for a few seconds to a few minutes but can, understandably, feel much longer and is often accompanied by a sense of acute panic.

"Even more frighteningly, some people also suffer hallucinations or experience the sensation that someone is in the room with them. This is thought to be due to the brain not properly switching out of dream mode."

The doctor's thoughts are the standard medical answers to such things as alien abductions and the like. But what interests me is that he goes on to say:


"We do no know why some people are affected."

As to Kate's experiences I'll leave that for readers to reach their own conclusions. There are many theories. Colin Wilson in his book, Mysteries, for instance writes about how ...


"... his paralysis sounds like the state that so many have experienced before projection of the astral body. It was the beginning of his remarkable psychic powers."