Stepping Into A Different Time Zone Or Time Slip 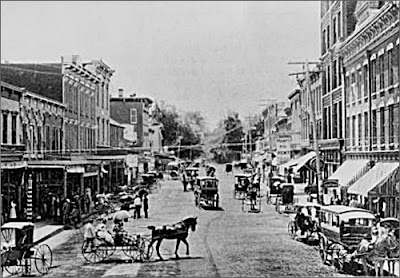 A while back I wrote about someone who claimed that, somehow, they had slipped into another time zone - experienced time travel if you like. Here's a similar experience from Penny. Wonder what you think?


I had an experience in my late 20's or early 30's that made me wonder about time shifts or place and time bleed-throughs.

Everything looked a little hazy and my view was a bit narrow (not being able to see too far on either side but to the right of me). The weather was still warm, the sun as bright as before. Only now the road was cobblestones (exactly as they used to be in the 19th century, I found out later) and to my right was a horse-drawn carriage.

By then I was standing petrified and confused in the middle of the road. The carriage was approaching, the horse braying, and I could hear the traffic of horses hooves and footfalls. Behind me and before me, the area (not clearly remembered) was as busy (crowded) as normal reality had been moments before.

Then just as soon as it began, I was back in normal reality, nearly mid road and totally confused. The whole thing didn't appear to take more than half a minute. The "visit" was a normal feeling, perhaps a bit more heightened.

Then the same "visit" occurred about a year or so later, exactly as before - same spot. Again, as I stepped off the road. I saw the same past time scene.

It might be worth mentioning that I seldom get confused in crowds, but that it happened twice in the same spot, surely must point to something having happened there once upon a time. The time stamp on that spot - if disregarding my having perhaps lived there decades ago - might be picking up on a moment in the life of another woman from a bygone era . . . .

Other Random Posts:
Coincidence Clusters And Beating The Coin Tossing Odds
The Cornish Mystery Of Trevethy Quoit Stones
White Feathers As Messages From The Deceased