He Saw A Ghostly Vision Of His Sister's Face 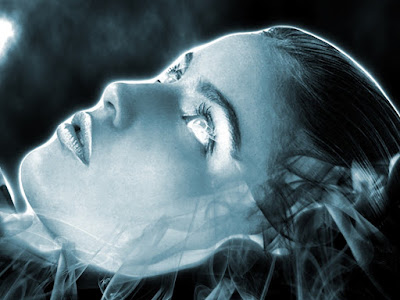 A ghostly tale today from the archives, regarding J.L. Sanborn, who was a representative of a large tobacco house. This is his story.


I was in Louisville several weeks last summer, as business was rather dull, and I was engaged in doing some work about the store. Each night I would go out to Bardstown and spend the night with my mother.

My sister, Emma, two years before, had married a man from Bowling Green, and had gone there to live. Our house was an old-fashioned one, with a broad piazza in front, and this in summer was covered with vines. In one corner of the porch was a hammock which slung there every summer, and in which my sister was extremely fond of lying before she retired for the night.

The evening of which I speak I reached home rather late. Mother had taken a bad cold, and after I had eaten my supper I left her inside and went out on the piazza to smoke a cigar before going to bed. The moon was shining brightly, and some of its light entered through a broken part in the lattice on which the vines clambered.

As I stepped out on the piazza and started toward the hammock I stopped in amazement, for as plainly as I have ever seen anything, I saw my sister lying on the hammock with her face turned partly away from me. I stopped and stared but it was so plain I could not be mistaken.

I waited about a minute, and then approached the hammock. The apparition slowly melted away, and I found out that what I thought was a face was a part of the moonlight.

Saying nothing I went inside and told mother I had dropped something on the hammock. She went out to find it and saw the same thing which I had. She came back trembling all over.

We were prepared for the worst, and next morning we heard that Emma had died the night before. She was killed in a runaway accident about the time we had seen the apparition.

Other Random Posts:
Her Nightmare Was True, Her Son Had Been Buried Alive
The White Dove As A Messenger Of The Dead
30 Year Old Library Book Coincidence Story