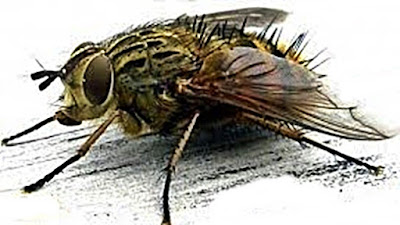 Here's a strange, amusing, story from a reader, who wishes to remain anonymous. Not sure if there is any great meaning to it, but sometimes we do appear to get help from unusual sources to enable us to make a point.


I don't know what you will make of this but I swear that it's true. I presume it comes under the category of a coincidence because I don't know how it could have happened otherwise.

I once worked for a boss who was very aggressive and domineering, and who criticized me for being much too easy going. She often preached that I needed to change my attitude to succeed with her company. One day she was rambling on and on about how I should have more fight in me, how I should change my attitude, become more out going and aggressive.

We were standing by a window as she continued with her rant.

It's true I am placid and usually easy going but I'd had enough of her lecture and wasn't going to change my nature for her, or anyone else for that matter.

I spotted a fly settling on the window and I pointed my finger to it and said, "I'm afraid that's the way I am. I wouldn't even hurt a fly."

As I said this, the fly left the window and landed on my finger. It stayed there and I brought it towards her so she could take a good look. It was absolutely magical, an unbelievable moment and it looked exactly as if I had intended this to happen.

Her expression was one of amazement and she clasped her hands to her sizable chest. The clear picture of her shocked face remains with me to this day, even though this happened about ten years ago.

As she looked at me I said to the fly, "Off you go," and wiggled my finger so that it flew off to the window once more. "Was there anything else?" I asked my boss.

I left the company a short while after this for somewhere more appreciative to my easy going nature.

Other Random Posts:
5000 Miles From Home She Meets Her Uncle's Best Friend On A Bus
He Saw A Ghostly Vision Of His Sister's Face
The Mysterious Skull With The Golden Wreath Of Protection