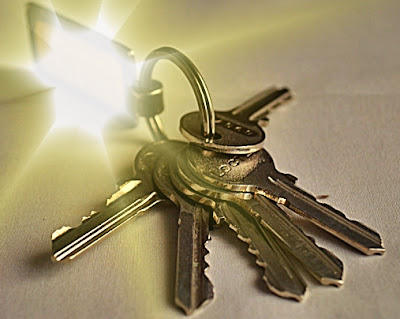 A coincidence story from someone who wishes to remain anonymous.


"I went on a long walk with my friend who was visiting me from up country. We did a circular walk through the woods and countryside of Dorset and about five hours later returned to my car.

I was horrified to see that the pocket, where my keys should have been, was inside out. I panicked, the keys were definitely lost.

Sheepishly I phoned my husband to drive over to where we were stranded, with my spare set of keys. He was none to pleased to say the least and eventually, following quite an ear bashing (with words only!), we reached home.

It wasn't only my car key that was missing. It was on a ring that also held my door key etc. plus other sentimental things I had attached: little miniature animals etc.

I put off getting replacements and the following weekend my parents also came to visit. I took them on the same walk. My husband was working all day Saturday so he did manage to lecture me about keeping my pocket zipped up properly and why hadn't I got any replacement keys as yet etc. etc. Yawn.

My parents enjoyed the walk, it was one they hadn't done previously. As we eventually strolled back to my car I saw a man in front of us bend to pick up something. My heart started thumping as I knew exactly what he had found. As we caught up with him he said, "Don't suppose you've lost any keys. I just found these in the ferns."

I could have kissed him because they were the keys I had lost last week. I was very happy on the drive home.

When he arrived home even my grumpy husband had to smile at the coincidence of the finding of the keys.

I suppose this is a coincidence.

Other Random Posts:
The Chipped Teapot Coincidence
The Meaning Of White Feathers As Messages From The Dead
Strange Ring Necked Dove Coincidence