A Couple Of Quickies Today 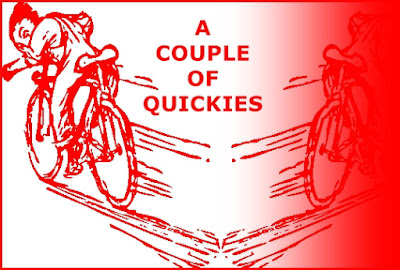 A couple of quickies today.


They Said She Was A Heroin Addict

In the UK, if you want to work with children, you have to be checked out by the Criminal Records Bureau. Amanda Hodgson didn't think there would be anything to worry about when she applied to become a welfare assistant at her child's school - how wrong she was.

The CRB sent her a letter claiming that she was a recovering heroin addict who was also violent and had assaulted police. As a law abiding citizen Amanda was shocked by this, to say the least.

How did this happen? Simply because, by coincidence, there is another Amanda Hodgson in the area who just happens to have exactly the same date of birth.

Easy enough to sort out, you might think, but the problem didn't end there. The onus was on Mrs.Hodgson to prove her innocence!

How do I know I'm going to win the lottery? Well it's because my name is Michael (but you can call me Mike).

The UK National Lottery records show that you are most likely to win if you are called Michael, John, David, Peter Robert or James. So how can I fail!

I suppose I'll have to buy a ticket though - there's always a snag!

Other Random Posts:
The Unknown Links Of Coincidence Brought Them Together
The Danger Of The Letter Z In Car Registration Plates
The Unusual Contact With Her Dead Mother