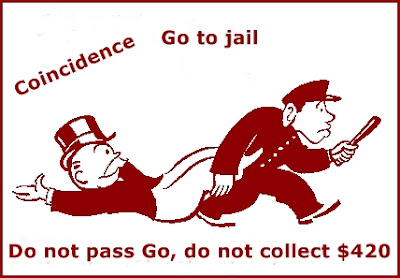 Here's a story I dug out of the archives. It shows that if you are about to do a dodgy deal you must make sure who is standing next to you.

An alcoholic cheque pusher, caught by what police describe as a most amazing coincidence, was sentenced to one year in the Ottawa County Jail.

James Shragg of O'Connor Street, will be treated for alcoholism while in custody. He pleaded guilty to two false pretenses charges.

Shragg was arrested in a Sparks Street bank. He was trying to deal with a forged cheque for $420 when the owner of the account on which it was written began to transact business at the wicket beside him.

She overheard Shragg talking to the teller and mentioning her name as a former employer. She immediately told her own teller to call the police.

After questioning, Shragg admitted passing another $420 cheque at another bank several days previously. He said he had not written the cheques and was passing them for other men - whose identity he didn't know!

Other Random Posts:
10 Coincidence And Synchronicity Stories
How Egg Custard Saved His Life
Reincarnation: Her Small Son Had Been Killed In A Previous Life During World War 1