The Unknown Links Of Coincidence Brought Them Together 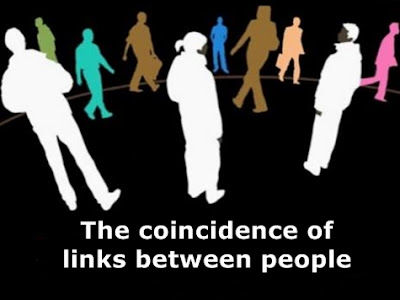 A story from Kim showing how links between people can bring them together.


"My name is Kim and I was raised in a small town in western Nebraska called Alliance. I am also recovering alcoholic. One day I was in an Alcoholics Anonymous chat room,(which I rarely visit), when a man named Scott started talking to me. As it turns out he once lived in Omaha, where I live now and went to school here to become a Nurse.

As we talked further, he told me that he wasn’t from Omaha, but was raised in western Nebraska. You got it, he was from my home town. After I learned his last name, it sounded familiar, but we were 7 years apart in age. We did however have some mutual friends in Alliance.

Then we got back on the subject of Omaha. He told me that he used to live in central Omaha on a street called Poppleton. I told him that I had just bought a home in North Omaha off of 45th Street. He said, "Really, my Aunt used to live on that street." Scott then asked for the address, when I told him he said that he was certain that this was the home that his Aunt lived in. He described my house to me, just like someone would have if they were standing next to me. I have confirmed that this was his Aunt’s home from neighbours that have lived on this street for over 20 years.

Scott and I continued our friendship, sometimes communicating through e-mail, but mostly over the phone for the past 8 months. We have become close and are very much in love. Scott and I believe that God brought us together through these series of coincidences."

Other Random Posts:
How Egg Custard Saved His Life
Freemasons: The Solemn Obligation Of A Master Mason
Tecumseh And The Presidential Curse Coincidence