The Self Tipping Hat Coincidence

I was talking to someone about good manners and politeness. "Remember the days," he said, "when a man, wearing a hat, would raise his hat if he met a lady."

I did remember. When in my early twenties, I had a job where I was out and about visiting people at home. If it looked like rain I would wear a hat so I didn't look like a drowned rat when knocking on someone's door. If a woman of the house answered I would touch my hat or raise it slightly. But it was a long time ago and I haven't worn a hat now for donkey's years.

Anyway, later that day (by coincidence of course!) I came across the self tipping hat - as pictured at the top of the post. 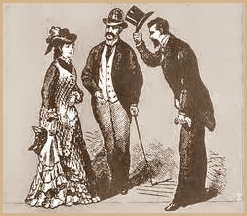 The tipping of the hat is a custom that goes way back to Victorian times in England. I read that a gentleman laden with parcels would have to set them down so he could tip his hat if he met a lady - which was probably a bit of a nuisance. But where there is a problem - there is an inventor!

In 1896  James Boyle of Washington invented a self tipping hat. The wearer simply nodded his head to activate a clockwork lifting device in the hat's crown.

Boyle noted that the device could also be used for advertising - a sign or postcard could be placed on the hat and the novelty of its movement would attract attention - no doubt!

Other Random Posts:
The Mystery Of The Cornish Roche Rock And Hermitage
The Biggest Coincidence Of All Is That You Are Reading This
The Unusual Contact With Her Dead Mother