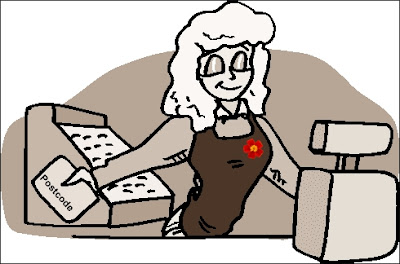 Here's yet another very strange coincidence seen in the Daily Mail from Mrs Chris Little. I think the moral of this tale is that we should perhaps interact and talk to strangers - as you never know where it may lead and what treasures could be uncovered ... remember conversations?


In 2001, the local supermarket where I was working as a cashier was taken over by another supermarket company.

After some months of trading, the new owners wished to find out from where most of their custom was coming, so they asked all cashiers if we could ask our customers to write down their postcodes on a form.

One morning during an unusually quiet spell, I was operating the basket till when I was approached by a smartly dressed young businessman. He smiled charmingly when I explained about the postcode collection and said he had no objection, but did it matter that he did not live locally, but was only in the area for a business meeting.

I replied that it didn't matter and he wrote his postcode on the form. When I glanced at it, we then had the following conversation.

Me: "That's a familiar postcode. Do you come from High Wycombe?"

Puzzled businessman: "Yes, I do."

Me: "Do you play at Princes Risborough golf club?"

Businessman, "Yes I do."

Me: "Do you know the professional golfer there?"

Businessman: "Yes, I do - a chap called Simon."

Me (laughing now): "Next time you pop into the golf club, would you tell Simon that Mummy sends her love?"