A Coincidental Psychic Reading In Denny's 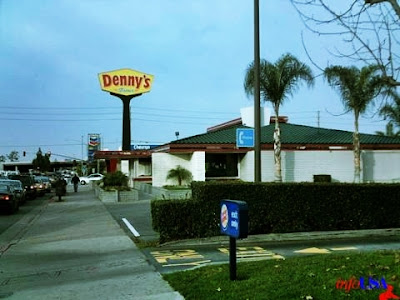 A coincidence story I was sent quite a while back from someone called Frank. It's not mind blowing, but it does show how sometimes we carry our past with us.


It all started when I was sitting at the counter of a Denny's restaurant in Costa Mesa, CA, about 3:00 a.m one morning. I had hitch-hiked out there to see a buddy of mine and was doing the cheapest thing possible to pass the time, until I thought it appropriate to head on over to his place.

North Lake was less than 400 people and had only a four room schoolhouse in the early sixties. First and second grade shared a room on the first floor. There was a Holly Melon in first grade when I was in the second. Their god-awful little house burned down. They left town for California.

"Dick Arndorfer pushed you down the stairs at the library and you broke your leg when you were five. When the house burned down, you smelled the smoke first and woke everyone up." I told her.

Maybe I should have asked her five dollars for a psychic reading before I blurted out things she barely remembered. Never scare the sh*t out of the waitress at Denny's at 3:00am is what I learned.

No great ending. When I went back the following night for some more coffee she told me that she'd called her grandmother who remembered my family.

I didn't tell her that Dick was killed later in a car accident.

Other Random Posts:
10 Coincidence And Synchronicity Stories
Emotions And Ghosts Stored Within The Walls Of Our Homes
Amazing Coincidence Of Hitler And British Prime Minister