I Heard A Ghost On My Stairs 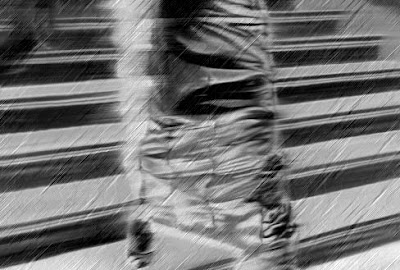 I have to admit that I have never seen a ghost or spirit, but I believe I have felt a presence and have noticed a lingering smell - such as my dad's blend of tobacco following his death. I've also experienced things like my father's watch stopping at the exact time my son was born. I have written about this previously, but I think I may have heard something as well ...

This happened when my wonderful mum was near to drawing her last breath. She had only days to live so it was a very emotional time. Two days before she died I was in the bathroom having an early morning shower when my wife called out that she was popping down to the local shop for something. "Won't be long," she said.

I finished my shower, and all was quiet as I dried myself, when I heard someone slowly coming up the stairs, their footsteps slow and precise. I took no real notice as I presumed it was my wife back already.

Puzzled, and a little apprehensive, I searched the house and felt quite relieved that there was nobody about. It would have been impossible for anyone to get in, as all of the doors and windows were locked - and yet I definitely heard someone coming up our stairs and passing the bathroom.

I was home from school as I hadn't been well. We lived upstairs in a flat (apartment). Suddenly my mum and I heard slow footsteps coming up the stairs. I remember being terrified listening to the steady tread on the stairs and continuing towards our living room. Even my mum looked apprehensive.

The door opened, and it was my grandmother! The front door was unlocked so she had just walked in and up the stairs. This was the one and only time she ever visited our flat, even though we lived there for nearly thirteen years - I won't go into the reasons why.

It may seem very fanciful, maybe I'm fooling myself, but I can't help but think that either my mother or her mother was on the stairs that day.

"Ever near us, though unseen ...
the fair immortal spirits tread;
For all this boundless universe is life; there are no dead."
~ Bulwer-Lytton

Other Random Posts:
The Magical Web Of Wyrd
Embarrassing Coincidence On A Nudist Beach
A Glimpse Of Her Death In A Former Life