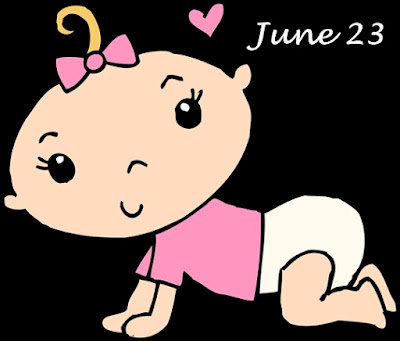 
We married two years ago and were renovating a house we had moved into. At the time I was pregnant so my husband did most of the heavy work, while I supervised! He was working in what was to be our bedroom and there was a boarded up fireplace, but the previous owners hadn't done a very good job of it.

My husband knocked in the boarded up part so he could re-plaster the area to make it all smooth with the rest of the wall. Behind the board was part of a newspaper, at the top was the date of June 23 (1970).

Nothing too strange in this but our baby was born a few months later on June 23rd. I don't know if this was some kind of prediction or an omen. We called the baby June (it was a girl!) and I'm called April. I'm pregnant again but I can't see us calling a son or daughter February!

Another coincidence for me: my mother's birthday was also the 23rd of June. Oh, and of course, that is also Brexit voting day when us in the UK vote on whether we should leave the European Union. (Yes?!)

Other Random Posts:
Tripped Over His Brother In World War Coincidence
Impossible Pie: A Way Of Life And Death
Eerie Island Of Spinalonga A Sunken City And A Mermaid