Doppelgangers On The Loose! 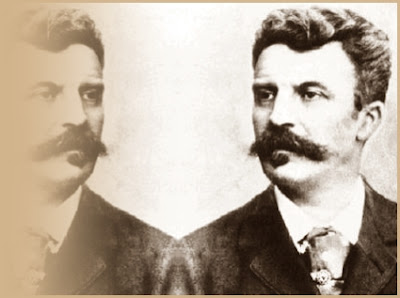 The question is: is the following story, from Ann Woodward, about a doppelganger, a ghost or is it just one big coincidence?


One of the partners in our firm died of cancer four years ago. She was dearly loved and sorely missed.

About six months ago I was in a department store and walking towards me was a lady who was the absolute double of her. In fact, so much so that it stopped me in my tracks, and made me take a deep breath.

I just wanted to run up to her and hug her.

When I related this to my work colleague the next day, she told me that it had been the late partner's birthday that day.

The photo at the top of the post is Guy de Maupassant who claimed that towards the end of his life he often saw his own doppelganger and started to interact with 'him'. So much so, it is said the doppelganger dictated a short story to him, which was then published.

I have also written previously of how I was mistaken for someone else a couple of times while travelling see The Advantage Of Being Mistaken For Someone Else.

Other Random Posts:
Abraham Lincoln Describes His Own Doppelganger
The Meaning Of White Feathers As Messages From The Dead
The Immigration Coincidence Story