There Are No Real Winners In A War

I was going through some old mementos my mother had hoarded away in a case. Amongst the photos, birthday cards and so on was a newspaper from May 8, 1945. This was VE-Day - Victory in Europe. But there are no real winners in wars. One of the articles in the newspaper illustrated this. It was written by Roma Sherris, the heading being 'Mrs.J puts out her bunting'.


Mrs. James is 60. She's small with rather a pointed face, and her eyes are dark and bright like a bird's. By profession she is a charlady.

This is not, you may think, a particularly distinguished or remarkable portrait. But for me - and I have known her a good many years now - Mrs. James is a symbol.

In 1939 Mrs. James three sons joined up [to go to war]. Tom was twenty-five, Dick was twenty-three and John, her 'baby' only nineteen.

Mrs. James was extremely proud and, like every other mother, a little frightened. Not that she ever said anything about that. It would have been 'soft.' And Mrs. James hates anything 'soft or sloppy' as she calls it.

When she came to work she would bring their photographs and presents in a canvass shopping bag. A picture of Tom, the good-looking one, standing outside an estaminet , with his arm round a pretty French girl's waist. A chromium brooch from Dick, with his regimental arms in the middle. And a gleaming apricot cushion-cover with a camel and palm trees stamped on it, from John, in the Navy.

One brilliant summer's morning in 1940 Mrs. James came to work a little late. She looked very small and pale in her old black coat and the hat she always wore, with a dagger hat-pin and black osprey trimmings.

She took a telegram out of the old canvass bag and handed it to me. Tom had been killed, fighting in France.

"That's was, that is," was all she said. Then she started to do the washing up.

A week later she had another telegram. During the evacuation of Dunkirk Dick's ship, bringing him home had a direct hit. He was killed instantaneously.

After that Mrs. James began to work furiously. "Keeps your mind occupied," she said. After her morning's charing she would go to a forces canteen to wash up. During the lunch hour she did her shopping and queued for fish and vegetables for her daughter, who was having a baby.

She seldom talked about Tom and Dick. I don't think she could trust herself and she was so frightened of being 'soft.' But she wore Dick's regimental badge proudly on her shabby coat and a pendant with a picture of the Eiffel Tower on it, which Tom had sent from Paris.

Last year [1944] Mrs. James had her last telegram. John had been drowned.

After that I thought she was going to pieces. She became incredibly thin and nothing would induce her to stop working. She never talked about herself but all the life had gone out of her bright eyes.

Then the flying-bomb raids started and Mrs. James became a different woman. She was really angry about them. All her old fighting spirit came back. And the day her ceilings came down her invective and sarcasm against such an unmilitary weapon of war were a joy to hear.

Her daughter got bombed out and Mrs. James brought her and the baby to live with her. Quite soon after that she started producing photographs of the baby out of her canvass bag when she arrived in the morning.

The other day I passed her house. She was balanced precariously on the top of a ladder fixing bunting over the front door.

I wanted to say, "You've won the war, Mrs. James," but I didn't she would have thought I was being 'soft'. 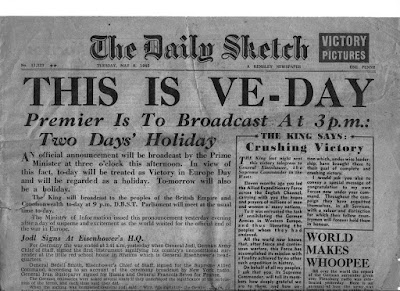 Sometimes we forget what others have done for us.

Other Random Posts:
The First And Last Soldiers Killed Coincidence
Premonition Of The Death Of Admiral Nelson At Trafalgar
The Magic Of Changelings And Cornwall's Men-an-Tol Stones