The Magic Of Changelings And Cornwall's Men-an-Tol Stones 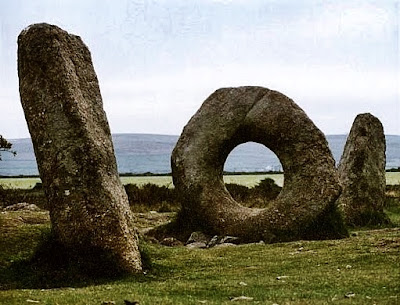 The photo above is of the Men-an-Tol stones in Cornwall, sometimes referred to as the Crick Stone or the Devil's Eye. They are said to have magical properties.

Some say they have a fairy or pixie guardian who can make miraculous cures. In one case a changeling baby was put through the hole in the stone in order for the mother to get her real child back. Evil pixies had exchanged her child, and the ancient stones were able to reverse their spell.

Changeling babies are often mentioned in ancient tales. They are typically described as being the offspring of a fairy, elf or other legendary creature that has been secretly left in the place of a human child.

A changeling may seem a fanciful idea but one was locked up in Cornwall's Bodmin Old Prison in the 1600s. Her name was Anne Jeffries and she was born in St Teath, Cornwall in 1626. Being a supposed changeling she had legendary healing powers - and this is why she was locked up in prison!

Ann Jeffries was kept in Solitary Confinement for six months, and not given any food. The strange thing is, she was not affected by this in any way. Her health and weight were maintained She insisted that she was fed and cared for by the fairies in her cell at night.

Ann, however, never described herself as a changeling. It is described in an old letter how her powers came about - from first seeing fairies. A quote from the letter (in old English):


In the Year 1645, (she then being nineteen Years old) she being one day knitting in the Garden, there came over the Garden-hedge to her (as she affirmed) six Persons of a small Stature, all clothed in green, which she called d'Fairies: upon which she was so frighted, that she fell into a kind of a Convulsion-fit: But when found in this Condition, we brought her into the House, and put her to bed, and took great Care of her. As soon as she recovered out of her Fit, she cries out, "They are just gone out of the Window; they are just gone out of the Window; do you not see them?"

Source: The letter was from a Moses Pitt to the Right Reverend Father, Dr. Edward Fowler, Lord Bishop of Gloucester.

Okay, got side tracked! Lets get back to the Men-an-Tol stones. 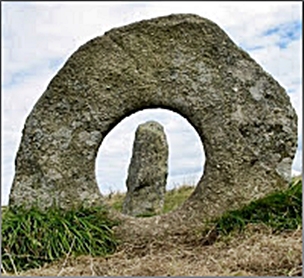 Men-an-Tol means, in the Cornish language, 'stone and hole' which very much describes what it is, as can be seen from the photo.

The stones are believed to be from the Bronze age and, if this is correct, would mean they are over 3500 years old. As to what they actually are or signify is debatable. They may once have been part of a circle of stones - which would have given it a ritual significance - or alternatively they could have been part of a burial chamber - the hole being for access.

These ancient stones have much folklore attached to them and are said to have a fairy or piskie guardian who can carry out various cures. With the obvious feminine symbolism it is claimed that if, at a full moon, a woman passes through the hole backwards seven times she will become pregnant.

Men-an-Tor is said to heal many ills. It was famous in olden times for curing scrofula (lymphatic tuberculosis) and rickets in children. The children were passed naked three times (or some say nine) through the hole to effect the cure. Adults can gain relief from bad backs by crawling through the opening nine times. Radiation levels around the inside edges of the hole are said to be nearly twice that found in the background environment, maybe this has some significance.

The stones have been used for telling the future. In 1856 Robert Hunt wrote that the holed stone could answer any question. Two brass pins would be laid crosswise on top of each other on the stone and would move by themselves, dependent of the question asked.

Rituals may also have once been taken place here, with the hole aligning to other ancient sites, or as a window into other worlds or dimensions. It has also been suggested that passing through the stone could have signified a ritual re-birthing process, perhaps performed as a rite of passage or to ensure fertility.

Whatever mysteries the stones hold, it is a magical place.

Other Random Posts:
Top 10 Coincidence And Synchronicity Stories
Doppelgangers On The Loose!
The White Dove As A Messenger Of The Dead