Lots Of Spanish Water Even In The Mountains

I was talking about how we should, perhaps, ask for answers or help from the Universe in my post of a few days ago The Secret Answer To Problems and Questions.

Since then all sorts of memories have flooded my mind about how I have found help by asking. Don't worry, I'm not going to bore you with them all! However, one sticks in my mind from when our son was only about 10 or 11. 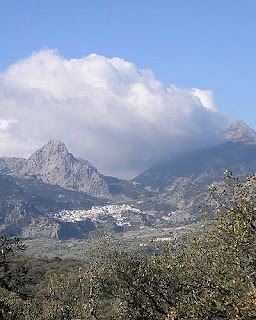 We were in the south of Spain on holiday and, in a small hired car, set off into the mountains. Can't remember exactly where we were heading but the roads became narrower and narrower as we went higher and higher. We hadn't seen another car or vehicle for over an hour when our car suddenly decided to grind to a halt.

Luckily there was a space where we could pull over, opposite was a sheer drop. The car had overheated and the radiator was empty. I wasn't too sure what to do. We needed water to fill the radiator and I then figured we could just about turn round and head back to civilisation.

Only problem was the mountains were completely parched and it was very hot. I went off for a walk to try and find some water, perhaps a small stream but no such luck. There was nothing about and no villages for many miles according to the map.

Strangely I felt very relaxed about the situation. I went off again in the other direction and after a few hundred yards sat on a big rock looking at the wonderful view. I then started to visualise water - lots of it, gushing everywhere and asked the Universe to help me.

I wandered back to the car and my wife and son were getting quite anxious. I told them not to worry as we'd get some water soon. Not sure if I believed this fully, especially when asked, "Yes, but how."

Moments later a lorry was coming down the road towards us. The first vehicle we had seen for ages and ages. The lorry pulled up and the driver said something or other. I don't speak Spanish so, with hand signals and random words, I indicated that we wanted water.

It was then I noticed the back of the lorry held a big circular tank and, yes, it was filled with water.

The driver beckoned me to the back of the lorry and I stood there with a small bucket he had given me. He turned a handle at the back of the drum and suddenly a jet of powerful water gushed all over me and virtually knocked me over. I was drenched from head to toe but couldn't help but laugh - as did my wife and son.

To cut a long story short the lorry had been delivering water to some of the small homesteads high in the mountains. Our car engine cooled, I filled up the radiator with water (plus a bottle for emergencies), turned the car round - though very apprehensive of the sheer drop - and then slowly drove down the mountain and finally reached where we were staying on the coast.

My visualisation of water gushing everywhere certainly came true. It was as if the Universe was playfully saying, "So you wanted water ... I'll give you water!"

Sceptics will say that the lorry was heading in my direction anyway, but to me - and the way it felt at the time - I had a little help along the way.

Further Reading:
The Secret Answer To Problems And Questions


Footnote Warning: One of the things I've noticed about asking for stuff from the Universe is that it doesn't pay to boast about it or to think suddenly you've got it all sussed. If you do you get a kick up the pants, playfully of course.

For instance I wrote a post The Art Of Finding Coins Or Anything Else. It was about 'how my wife is always finding coins' whenever we go for a walk. But since then my wife hasn't found any coins at all - not even a penny! As with a child the Universe gives us a bit of a nudge if we get too big for our boots. So I now have to say 'how my wife was always finding coins!'
Posted by Mike Perry at 11:46