The Mystery Of The Lobster Nightmare

Here's a strange story from John Moss and I'm assured that it's true. I can't explain how it happened maybe you can. 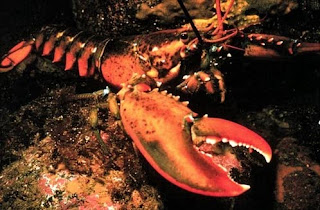 One year in my youth when I had been working a couple of years, I went camping with a friend of the same age at a small seaside resort where we fished and went after lobster from a small rowboat.

Our tent was an ex army bell tent. My friend mentioned that we must be careful with lobster as his father had once been bitten by one and suffered three months of blood poisoning.

One afternoon we caught a number of lobsters and just left them free in a section of our boat. We were both barefoot and I disliked the creatures moving about, trying to climb up the sides of the boat, their legs and feelers never still.

The result was that all this preyed on my mind that night.

In the early hours of the morning I had a violent nightmare when I saw hordes of red lobster coming for my bare feet. I must have yelled in terror, which woke me and I found myself standing outside the tent in the moonlight.

My friend lit a hurricane lamp and had to untie the door to get out and ask me, "What's the matter."

The tent was secure and to this day it remains a mystery to both of us how I got outside the tent.