Twin Deaths And Other Twin Coincidences

Not all coincidences are good news. One such case was reported by news groups around the world in 2002 when two 70 year old twin brothers died.

The Finnish twins were killed on the same stretch of road within hours of each other. 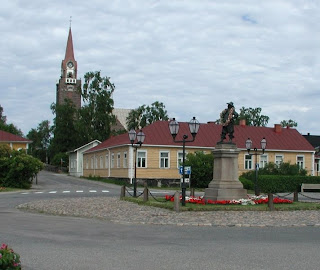 The scene was set in Raahe, 600 kilometres north of the capital, Helsinki, where the first twin met his death while riding his bicycle and was hit by a lorry. (Photo: Pertsaboy)

Just two hours later his brother was crossing the same road, again on his bicycle, when he was hit and killed by another lorry. There is no reason to suspect that the second twin knew of his brothers death.

The police officer investigating the tragedies, Marja-Leena Huhtala, said at the time, "This is simply a historic coincidence. Although the road is a busy one, accidents don't occur every day."

Ms. Huhtala went on to say, "It made my hair stand on end when I heard the two were brothers, and identical twins at that. It came to mind that perhaps someone from upstairs had a say in this."

It's interesting as to how many twins have a special connection. Debbie LaChusa for example has written a book, Twin Connections,

Debbie gives examples of her own connection with her twin:

"... our husbands also share the same birthday (no, they’re not twins!), they are both left-handed, they both wear glasses and they both graduated from the same high school. Pretty weird, huh?!

Is it just a bond, or is it something more?

We have another connection - and this is the one that baffles me the most. I can’t tell you how many times I have been thinking about calling my sister, when the phone has rung and it was her on the other end. It just happened again today, as I was writing up this story!"

Further Reading:
Dead Wife Helps Husband Win £26 Million
What A Coincidence
How The Past Can Link To The Future
Posted by Mike Perry at 14:25