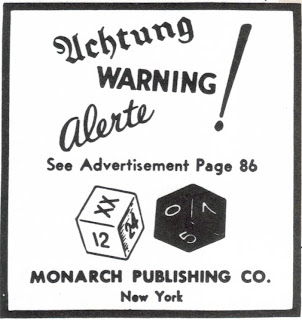 I'm back to World War 2 again for a coincidence today and to the Japanese attack on Pearl Harbor. A question raised at the time was about how the attack details may have been sent in advance to agents via advertisements in The New Yorker. Or there again the ads may just have been a pure coincidence.

There were two advertisements in question, both for a new dice game called The Deadly Double. Each ad had a headline of Achtung, Warning, Alerte! and were placed in the newspaper sixteen days prior to the attack.

The smaller of these advertisements - see top right of this post - showed two dice, one black and one white. On the white dice were the numbers 12 and 24 and also XX, which would be 20 in Roman numerals. The black dice showed the numbers of 0, 5 and 7.

It was claimed at the time that the 12 and 7 could have referred to the date of the attack (December 7); 5 and 0 may have indicated the time of the attack and the XX (20) might have stood for an approximate latitude of the target.

As for the other advert (see left) at the bottom were the words THE DEADLY DOUBLE and underneath this was a double headed heraldic eagle with a shield bearing a double cross (XX). This was all very similar to the armorial device of Germany.

These suspicions were taken seriously enough to be investigated by FBI agents and they made visits to the people who had placed the advertisements. These were a Mr and Mrs Roger Craig.

The game turned out to be legitimate and was sold in several New York stores.

The fact that the US government had looked into the matter was kept under wraps until 1967 when a U.S naval intelligence officer, Ladislas Farago, broke the story in a press release for a book he had written called The Broken Seal.

At the time Roger Craig's widow was emphatic that any connection between the advertisements and Pearl Harbor 'was just one big coincidence.'

In some ways this is a similar coincidence story to WW2 Code Names Found In Crosswords. Though both episodes were completely unproven there still remains opinion in some quarters that these were more than just coincidence.