Paralysed By The Aliens Of The Lavender Field 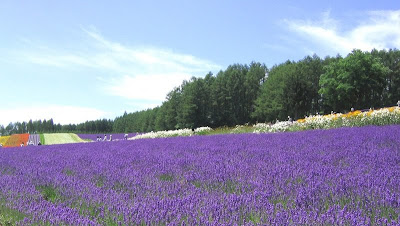 Sometimes I wonder if it's worth giving examples of UFO sightings as I'm sure there are dozens of made up stories. It's difficult to separate the wheat from the chaff.

I'm not sure why but the following alien encounter felt believable, perhaps because this had also been verified by regression analysis. I also liked the fact that it happened in France!

A farmer, Maurice Masse, was up and about early at his property in Valensole, France. He decided to have a quick cigarette at about 6am before working in the lavender fields. He heard a whirring noise above him and expected to see some sort of helicopter - but he didn't see anything in the sky.

Masse walked out into the field and there he saw what he described as an egg shaped object, about the size of a small car, which was supported on six spindly legs. On top of the body there was a raised dome. All in all it was about eight feet tall.

In front of the craft / UFO were two small figures which he took at first to be children. They were inspecting the lavender plants.

As he ventured a little nearer he realised that these were definitely not children. They were human like but had large bald heads and appeared to have no necks, their heads seemed to merge with their torso.

The aliens faces had slanting eyes and lipless mouths. They were both wearing green/blue garments that looked something like a boiler suit and there was a small canister hanging from a belt.

One of the aliens looked up from his examination of the lavender and saw the farmer. A beam of light hit him and rendered him paralysed, though he was still aware of what was happening.

The humanoids communicated with each other by strange sounds. Maurice Masse said of this, "They were looking at me and must have been making fun of me. Nevertheless, their facial expressions were not ill-natured but very much the reverse."

He was then able to watch the beings move back to their craft, with a strange movement. Masse describes this as a "falling and rising in space like bubbles in a bottle without apparent support".

They entered their UFO through a roller-blind type hatch and he then saw them looking at him through the transparent dome. The vehicle took off with a whistling sound and disappeared once it reached a height of about 60 feet.

It took about a quarter of an hour before Masse regained use of his limbs and, with no immediate apparent side effects, he went off to tell his friends and family what he had witnessed. He told them, "The strangers had such a calm and peaceful aura about them, so I was not in the least afraid."

It's interesting that there are similarities to other sightings, even to the UFO Aliens Of Voronezh where one witness described an egg shaped object and a humanoid about four feet tall.

Other witnesses at Voronezh also described the alien's head as being a continuation of the shoulders.

In another alien incident in France a Marius Dewilde tells of how he was also paralysed by a beam of light. In South Africa Danie Van Graan saw small humanoids and they too sent out a beam of light to paralyse him.

Going back to Maurice Masse, after the sighting the lavendar around the landing site withered and died. With Danie Van Graan the craft took off from an alfafa field - again here the crops would no longer grow.

Similarities and also discrepancies exist with alien and/or UFO sightings. One day we will know the answer.

Further Reading:
The Mystery Of The Giant Aliens Of Voronezh
A Dream Or An Alien Encounter