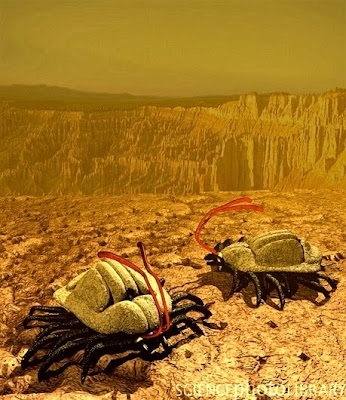 To a degree this follows on from my post on Monday, Knowledge Learned From Fish Like Aliens.

Many will laugh and mock the idea of fish like aliens which impart wisdom but, if there is life on other planets, then there is absolutely no reason why it should resemble us humans.

Aliens don't have to be little green men or any other caricature that we often see. Professor Zdenek Kopal, ex of the University of Manchester, believes that our own genetic pattern is such that the odds against it being duplicated in another world is the number 10 followed by 936 noughts! In other words pretty remote.

Genetic blueprints for inhabitants of other worlds may be quite unrecognisable from our own.

If we let our imaginations run wild, on other planets there could be an intelligence embodied in a microscopic droplet of liquid or even confined underground. They could, on the other hand, have enormous brains necessary to live in their particular environment.

Professor Sagan, who co-wrote Intelligent Life In The Universe, suggests that space people may well breathe gases we consider to be poisonous or be living happily in great cold or scolding heat or in strong acids.

So life could well be very different from us. If they were to live in a world with higher atmospheric pressure than our own then they could possibly have some sort of armour plated bodies.

Similarly on very large planets, with a stronger force of gravity than earth, the inhabitants may be larger and more stockily built maybe even tortoise like.

Their latest study published in the Journal Science found earth like planets were relatively common. Dr. Andrew Howard said, "If we extrapolate down to earth-size planets between one half and two times the mass of earth, we predict that you'd find about 23 for every 100 stars.

As I see it there must be life somewhere other than earth and some would surely be way in advance of us. A thousand, or even ten thousand years of evolutionary difference is nothing on a cosmic scale; and the chance that we could come across another civilisation in the Universe at approximately the same level of development - and with a similar intellect and understanding - must be very small.

Other living beings could be hundreds of millions of years ahead of us. Any similarity between them and us would be farther apart than we are from insects.

Going back to those fish-like aliens: there is no reason, therefore, why there shouldn't be such creatures and likewise no reason why they couldn't be far in advance of us.

We are very inward looking if we think we are alone - absolutely anything could be out there both good and bad. Our own form of life could well have been transported to earth from another planet - but that's a whole different debate.

Further Reading:
Knowledge Learned From Fish Like Aliens
War Of The Worlds Remnants Found On The Moon
Paralysed By Aliens Of The Lavender Field