Ask And By Coincidence You Might Just Get It 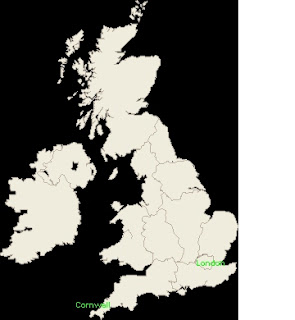 When I published the post last week How To Get A Car Parking Space Using Coincidences I was reminded that this isn't the only thing to come about in this way. Terri Patrick and Trish and Rob left comments to this effect.

I remember, for instance, when my wonderful mother was in hospital in London (where she lived) after a fall and then a nasty stroke. Living in Cornwall, 300 miles away, this had me travelling up and down the motorway for weeks on end.

I'd just arrived home on a Monday, after staying in London for about ten days. There was a phone call from the hospital administration department saying the doctor had decided that my mother needed to go into a Nursing Home - and that they wanted her bed by Friday.

They indicated that my mother would prefer to be near me. If I couldn't find somewhere they would place her in a Home 'somewhere in London'. I knew finding a place locally would be difficult as a friend had a problem finding a Nursing Home near to where he lived for his parent. Everywhere is full as there are always waiting lists and not enough beds / rooms.

Somehow I got my head straight and asked the Universe for a perfect place for my mother to stay, near to my house.

I had no idea what to do next so I got the Yellow Pages phone directory and looked up Nursing Homes. There were only two listed in my town.

I again asked the Universe for guidance.

I picked out one of the Nursing Homes, made a phone call and was told that, by coincidence, in the last hour a room had become vacant. They were just about to notify the local hospital and Social Services about this, but for some reason had been delayed in doing so.

I asked if they could put off circulating the vacancy and explained about my mother's situation. They agreed, providing I could be there within the next half hour to look over the room, the Home itself and make a decision. Otherwise they would follow their standard procedure and the room would be filled.

My wife and I were there in ten minutes.

To cut a long story short the room and everything else looked to be satisfactory and quite homely. I phoned London and they agreed this would be suitable and furthermore also agreed that they would arrange an ambulance to transport my mother to Cornwall on the Friday. What's more the London Council would cover all of the costs for her stay and her transportation. Phew!

Once my mum was settled in she spent a reasonably happy time at the Nursing Home and we were able to visit her virtually every day.

Many will say it was just chance, or a bog standard coincidence, that everything worked out so well - and that this would have happened regardless. For me though, the way everything fitted together so perfectly, was a sign that there was some sort of higher power at work. I felt my request had been answered in full, with more besides.

I'm now of the opinion that there is usually an answer to most problems if, that is, we ask for a perfect solution: 'to the good of all concerned'.

Further Reading:
How To Get A Car Parking Space Using Coincidences
How To Have Whatever Success We Want
The Law Of Attraction Powered By Visualisation