21 Questions Of Life Answered By The Buddha 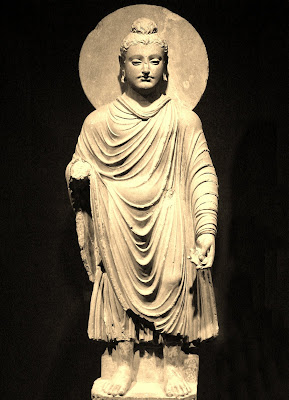 The following questions and answers are taken from the 1894 book about Buddhism called The Gospel of Buddha.

This is a compilation from ancient records by Paul Carus.

On a certain day when the Blessed One dwelt at Jetavana, the garden of Anathapindika, a celestial deva came to him in the shape of a Brahman whose countenance was bright and whose garments were white like snow. The deva asked questions which the Blessed One answered

The Blessed One replied:
The sharpest sword is a word spoken in wrath;
the deadliest poison is covetousness;
the fiercest fire is hatred;
the darkest night is ignorance.

The Blessed One replied:
The greatest gain is to give to others;
the greatest loss is to greedily receive without gratitude;
an invulnerable armor is patience;
the best weapon is wisdom.

The deva asked:
Who is the most dangerous thief?
What is the most precious treasure?
Who can capture the heavens and the earth?
Where is the securest treasure-trove?

The Blessed One replied:
The most dangerous thief is unwholesome thought;
the most precious treasure is virtue;
the heavens and the earth may be captured by the mind's eye;
surpassing rebirth locates the securest treasure-trove.

The Blessed One replied:
Attraction is wholeness;
repulsion is unwholesomeness;
the most tormenting pain is bad conscience;
the height of bliss is redeemed awakening.

The deva asked:
What causes ruin in the world?
What breaks off friendships?
What is the most violent fever?
Who is the best physician?"

The Blessed One replied:
Ruin in the world is caused by ignorance;
friendships are broken off by envy and selfishness;
the most violent fever is hatred;
the best physician is the Buddha;

The deva continued:
Now I have only one doubt to resolve and absolve:
What is it fire cannot burn,
nor moisture corrode,
nor wind crush down,
but is able to enlighten the whole world.

The Blessed One replied:
Blessing!
Neither fire, nor moisture, nor wind
can destroy the blessing of good deeds,
and blessings enlighten the whole world.
Hearing these answers, the deva was overflowing with joy. Then clasping hands, bowed down in respect and disappeared suddenly from the presence of the Buddha.

Further Reading:
Nine Questions Including The Most Difficult Of All
The Most Wonderful Wonder Of The World
The Mantelpiece Buddha