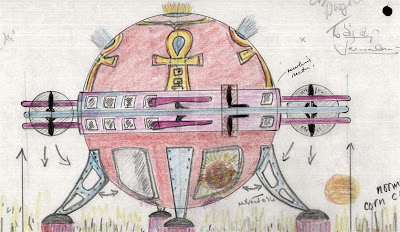 The UK National Archives have again released pages and pages of UFO reports - over 8500 reports! You can see these for yourself on their website here. I understand, however, that they will only be available for free for one month. It would be quite a time consuming slog to go through them all.

The sketch above shows what is purported to be a UFO flattening a cornfield in Oxfordshire, England and going on to create a crop circle. Note how it has the Egyptian symbol of life, the ankh, on it's bodywork. Truth or fiction? Who knows for sure but it was reported and recorded by Britain's Ministry of Defence.

The sketch below is another reported UFO this time in Scotland, which someone has taken a while to draw. 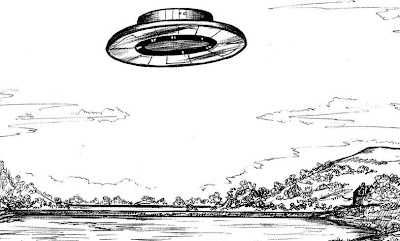 It's interesting that everyone seems to get the same basic letter in reply to their sighting - see below. Only the last paragraph differs which refers to the persons 'particular observation'. 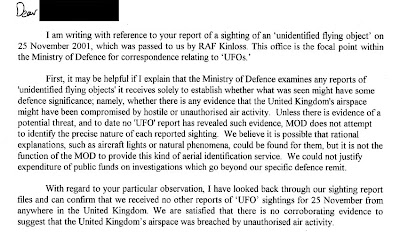 There has only been one UK official government discussion on UFOs. This took place in a House of Lords debate and lasted for three hours. Nothing much came out of this - Lord Clancarty said there has been thousands of UFO sightings and mysterious visits but others said sightings were all down to 'natural phenomena'.

If you've got plenty of time there's lots to look through, though much seems to be pretty standard stuff, with no real outcome.

Further Reading:
The UFO Detector Appliance
Ezekiel: The Alien Abduction Of The Bible
A Dream Or An Alien Encounter